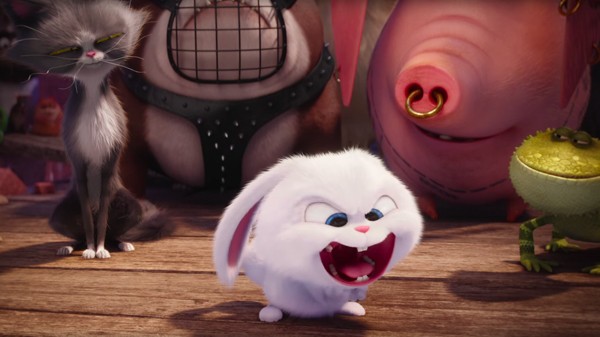 I defy anybody over the age of 8 to get much of anything out of “The Secret Life of Pets.” But perhaps the fact that we’re two generations past the many TV iterations of “Looney Tunes” and Saturday morning kid-watching rituals explains the passing grade the movie gets from a majority of reviewers.

Not a HUGE majority, mind you. It’s time like this when you go to Metacritic for a more discriminating and nuanced take on a movie that seems to out of whack with what seems obvious on the screen (few jokes, Looney Tunes variations for characters, famous voices straining to find something amusing to say). So, 76 on the tomato “fresh or rotten” scale, 61 on Metacritic’s ascending/descending fluid scale.

Not awful, just not all that.

I found more laughs than most in “Mike and Dave Need Wedding Dates.” OK, maybe I was crushing on Aubrey Plaza, the living embodiment an ancient libidinous Jewess stereotype. She owns it. This movie earns higher ratings on Metacritic than it does on Rotten Tomatoes. I gave it 2.5/4 stars, which is just a smidge above the mean.

Alex Gibney is the hardest working guy in documentaries, and sooner or later, he’s going to spread himself too thin — TV shows, band docs, ESPN sports films, feature film investigations. But he hasn’t gotten there yet. “Zero Days,” his dissection of the Stuxnet virus which attacked Iran’s nuclear weapons program (and spread worldwide) is a fascinating cyber mystery. Not dazzling in style or its conclusions, but solid film journalism with a cautionary bent. Mostly good reviews for this one.