Posted on July 5, 2016 by rogerinorlando

The mad pageant that is masked Mexican wrestling earns a sympathetic documentary in “Lucha Mexico,” a behind-the-scenes look at the most popular sport that doesn’t involve a ball among our neighbors South of the Border.

Filmmakers Alex Hammond and Ian Markiewicz are the outsiders peeking behind the curtain, here. And if they’re short on novelty or an original point-of-view — many wrestling documentaries go the “Yeah, it’s fake, but it’s an art form and it’s very dangerous” route — they at least capture the subdued, injury-riddled lifestyles of these famous-if-not-quite-rich athlete/performers.

“What you earn from being a wrestler,” one retired legend intones (in Spanish, with English subtitles), “is injury, and the love of the people.”

There isn’t a fortune to be won grappling on mats from outdoor market parking lots all the way to “The Cathedral of Lucha libre,” the Arena Mexico, a 60 year old venue in Mexico City which all the stars aspire to. But men flock to the schools where retired veterans of the ring teach them the moves, how not to hurt themselves or others as they grapple for money.

The film follows the unmasked star “Shocker” (Jose Luis Jair Soria, middle) and the American muscleman Strongman (Jon Anderson, right) as they cope with the lifestyle, the workout regimen, the injuries and the fame that comes with their work. 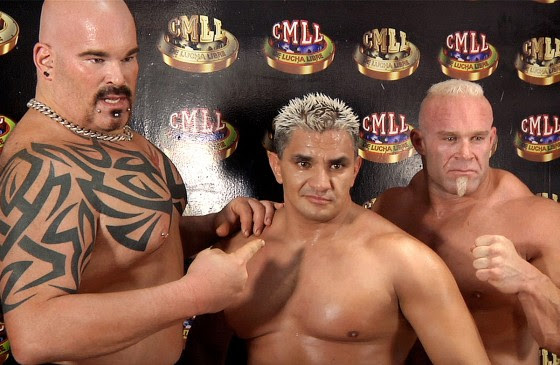 Watching the mammoth Anderson crawl into the back of a vintage Mexico City VW Beetle taxi is the only image you need to figure out this isn’t the glamorous life.

It’s a sport of heroes and heels, just as it is north of the border, called “tecnicos” (good) and Rudos (bad, masked villains) in Mexico.

There are folding chairs and elaborate tumbles taken in and out of the ring. Microphones are grabbed for mid-match trash talk.

The big difference, as other documentaries and even the Jack Black comedy “Nacho Libre” demonstrate, are the masks. Losing one in a grudge match can be traumatic, humiliating.

Blue Demon Jr., son of a legendary luchador who went by Blue Demon, notes that “I began to live behind the mask” once he accepted his fate, taking up his father’s sport. But it’s a lonely life, he adds — 18 hours a day, making public appearances, posing for photos, always in that mask.

There are competing circuits, famous females and famous dwarf wrestlers, and plans to take the whole lurid enterprise global.

The film captures tragic moments — deaths related to Lucha Libre — with mixed, muted emotions. They’re jarring and nobody involved — interview subjects or filmmakers — knows quite what to do with them.

A dwarf wrestler shrugs and accepts the pain and the risks with his version of national fatalism.

“In Mexico, we laugh at Death.”

They also laugh, a little, at the bouts and the way some of their fellow countrymen take the action in the ring way too seriously. It’s a wonder that the showers of beer cups that greet the taunting Rudos don’t turn more violent or at least threatening.

But it typically doesn’t, and if nothing else, “Lucha Mexico” can be appreciated for its honest depiction of a cultural outlet that gives its public, young and old, a chance to let off steam and yell until they’re hoarse at these uniquely Mexican archetypes.

MPAA Rating: Unrated, with violence and injuries in the ring, some profanity