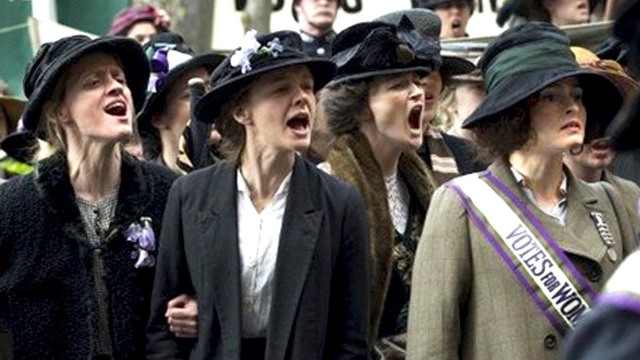 In the best picture of 2015, Carey Mulligan is the stoic, long-suffering sweatshop worker radicalized into action. Helena Bonham-Carter the pharmacist who would have been a doctor had women in Britain been allowed into that profession. Brendan Gleeson is the police inspector tasked with keeping women in their place.

And Meryl Streep is the regal, fugitive icon of the movement in “Suffragette,” a long-overdue film treatment about the early 20th century tipping point struggle to win women the right to vote, and through it, the chance to control their own bodies, their own lives and their own destiny.

“Long overdue?” Think of the scores of films about the American civil rights movement, the long catalog of gay rights films. Even India and “Gandhi” earned film treatment before a serious movie about the global movement to emancipate and grant suffrage (the political franchise-right to vote) to “the fairer sex.”

“Women do not have the balance of mind” to deal with complex and important tasks like voting, the argument went. So in 1912 Britain, the government might pay lip service and hold hearings on women’s plight — horrific work conditions, inferior pay, “controlled” by husbands through repeated pregnancies, beatings and the like. But nothing would come of it, and a compliant British press either ignored or was censored from covering the women’s suffrage movement.

Mrs. Pankhurst (Streep) might make the occasional headline, an elusive agitator on the lam from the law, making pronouncements about the “50 year struggle,” firing up the faithful with secretive, rare public speeches to women.

But to women like the fictional Maud Watts (Mulligan) and Violet Miller (Ann-Marie Duff), whose world was a daily struggle of grueling labor in a laundry (“women’s work”), abusive sexism in the workplace, sometimes abusive spouses and the exponential increase in hardship caused by every unplanned pregnancy, “suffrage” was just an idea. Suffering was what they had to deal with.

Violet has already figured this out and is sneaking out to meetings, taking part in civil disobedience. The female flash-mobs of their day would congregate on crowded streets and start hurling rocks through shop windows. Newspapers and government ignoring us? Let’s see if interrupting commerce will get their attention.

Even though she has a somewhat sympathetic if dull husband (Ben Whishaw) to come home to, and a little extra responsibility at the laundry thanks to her submissive good looks, Maud is curious about this secretive movement.

Maud is reluctantly drawn in, impressed by women like Edith Ellyn (Bonham Carter), smart, in liberated marriages, and determined to do whatever it takes to get the government to take action for equal rights for women. “Whatever it takes” included bombing mailboxes, cutting telegraph and telephone lines — crimes against property, not against people.

Director Sarah Gavron (“Brick Lane”) and screenwriter Abi Morgan (“The Iron Lady”) keep emotions close to the surface here. A profound sadness hangs over “Suffragette,” thanks to the seeming hopelessness of the cause and the violence hurled at the women in it.

Gleeson puts aside his Irish cuddliness as the police inspector charged with infiltrating, turning and subduing this rebellion. His quiet menace is in the powers at his disposal. Mass arrests, night-stick mass beatings on the street (police riots, in essence) and arbitrary jail sentences are his threats. Will Maud buckle?

Mulligan’s ability to suggest flinty nerve underneath a willowy frame is of great service, here. Maud is a doting mother of a little boy, plainly loves her husband and is stricken when he is bullied into doing what the men folk encouraged each other to do — “keep your woman in her place.” Maud won’t have that, and Mulligan lets her growing boldness show in tiny increments. She’s absorbing the suffragette message.

“If you want me to respect the law, then make the law respectable!”

If you know the rough outlines of history — the signature act of civil disobedience in this movement — you cannot help but shrink from the suffering and injustice hurled at them, and we viewers, here. Sensitive souls will find themselves on the verge of tears from start to finish in “Suffragette.”

History and film buffs may find themselves puzzled over the late arrival of this screen story, 100 years after the events that inspired it. And ponder the idiotic “outrage” over the film’s tag-line, “I’d rather be a rebel than a slave,” as if slavery’s definition has so narrowed that it’s owned by anyone.

“Suffragette” is an important story, handled with sensitivity and brio, performed with a distinctly British reserve that cannot contain the feminist outrage and moral courage so evident in its characters. In a reasonable “Downton Abbey” era, they only became real when they stopped being reasonable.