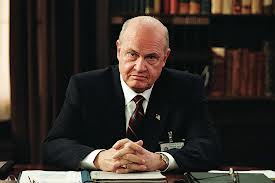 I got to know Fred Dalton Thompson when I worked at a newspaper in Tennessee — after the Watergate hearings and the movie “Marie,” where he played himself as a politician who helps a woman stand up to corruption — right around “Die Hard 2” and movies where he played generals, admirals, police chiefs and “Any authority figure you can think of. That’s what Hollywood wants me to do.”

An accomplished Republican politician, opposite number (Minority Counsel) to Hillary Rodham Clinton on the Senate Watergate committee, Senator from Tennessee and one-time candidate for president, he died of cancer this weekend.

I tracked him down for that “Die Hard” sequel appearance, and a few years later when he played an over-compensated banker in over his head during the heady days of takeover mania in “Barbarians at the Gate.”

He’s turned up in horror films and a few Christian movies in recent years. And on TV in those cynical “Sell Reverse Mortgages to the Elderly by Pandering to Aged Veterans and Mentioning Ronald Reagan” TV ads.

A nice guy. An opportunist, to be sure, pandering to the Tea Party wing of the GOP. I recall mentioning to him “If you ever run for office again, SOMEbody is going to pull up that footage (of an overweight Fred foolishly dressed in a Superman suit for a super-rich Manhattan costume party) and beat you over the head with it.”

He laughed, and said, “You know, you’re probably right. So I probably should keep those Democrats guessing.”

A sophisticated slicker, he bought a pickup and flannel shirts and played a good ol’ boy to win his Tennessee Senate seat. What a hustler. Good actor. Presence to burn.