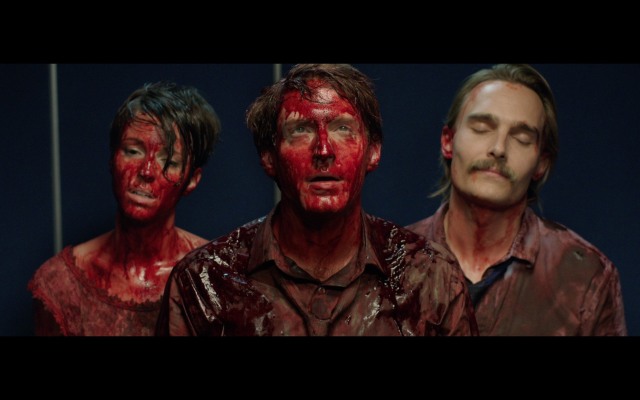 There’s a new set of criteria movies — especially indie films with little or no marketing — must meet. And Indie World is a little slow catching onto it.

Used to be, you made your indie film with festivals in mind. You could afford to be patient in your storytelling, though truth be told, selection committee folk toss your DVD in the trash if you don’t get ON with it. Eventually.

Now, you need to fret over how Netflixable your film is. If we’re willing, and many of us are, to give an unknown but promising title a try on Netflix, how long before we bail and look for something that gets right down to business?

Now that I’ve stalled and beaten around the bush…case in point — “”Bloodsucking Bastards.” The title tells us it’s about vampires, and possibly funny.

The comedy troupe Dr. God cooked it up. And it opens with a gory “the grossest thing I’ve ever seen” moment. Why not wade in?

Why not? That’s almost the only real action or borderline funny thing to it for 45 minutes or so. And it’s only 86 minutes long.

Veteran character player Fran Kranz (“The Cabin in the Woods”) is Evan, a guy semi in charge of a seriously dysfunctional and lazy sales center. He’s up for a promotion, something his especially lazy (video games at his computer all day) wiseass pal Tim (Joey Kern of “Cabin Fever” and “Super Troopers”) relishes.

Then the Big Boss (Joel Murray) brings Max, Evan’s nemesis, on board. Max (Pedro Pascal) is there to shake things up before a round of layoffs, mixing threats with heated pep talks to the troops, to “sell a bunch of useless crap to the fat losers in Alabama and bored housewives in Ohio.”

Which they do. Only bloody things start happening, and only Evan and Tim seem to notice them. Sexual intrigues (Emma Fitzpatrick) take a back seat as the two dopes start to figure out what’s happening, and what to do about it.

“I looked some stuff up on Wikipedia.”

Eventually, the blood starts to spurt and maybe, between the gruesome laughs, we notice the metaphor for today’s Race to the Bottom employment practices. The Undead are loyal, work longer hours and are cheaper to keep.

The one-liners are feeble — “Bam! Snap!” — the performances mostly perfunctory. It takes forever to get going, something nobody who hasn’t bought a ticket will sit still for.

But the finale has to be seen to be believed. Remember, we’ve been promised “the grossest thing I’ve ever seen.”