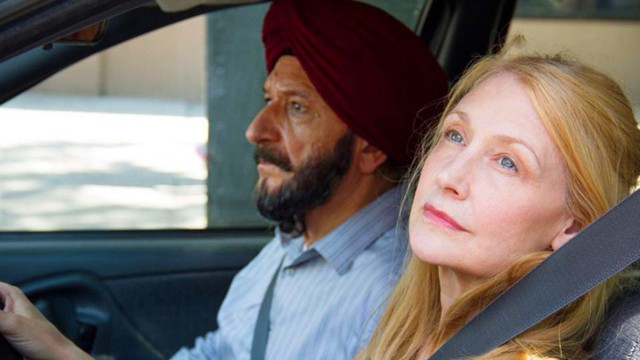 People who only know Ben Kingsley for his breakout performance in the epic “Gandhi” or his recent years of playing the go-to Brit villain would be surprised by the variety in his non-Jaguar commercial resume.

There was the arm’s-length romance set against the release of aquarium-bound sea turtles, “Turtle Diary,” and the darkly romantic longing of a backwater spy of “Pascali’s Island.”

“Learning to Drive” fits in with that part of his repertoire, a mild-mannered not-quite-romantic romance about a Sikh driving instructor and the harried, depressed and distracted student, a woman going through a traumatic divorce.

Kingsley is Darwan, a dignified and somewhat stiff Sikh, a workaholic who seems to support an apartment full of Sikh men who turn out to be illegal immigrants.

By night, he’s a cabbie. And then, after a morning visit to the temple (Kingsley is meticulous and respectful in his practice of rituals), he checks into his day job — as a very patience, quite conscientious driving instructor.

Wendy (the vivacious Patricia Clarkson) meets Darwan on the worst night of her life. Her husband (Jake Weber) is leaving her, trying to escape her clutches in a cab. And she takes the fight — profane and weepy and physical — into Darwan’s taxi.

When she leaves a parcel in his car and he returns it, he leaves his card. On an impulse, with her daughter (Grace Gummer, Meryl Streep’s other daughter) living on a farm in Vermont, Wendy resolves to finally learn how to drive. But she changes her mind in the sober light of day. Darwan has to trick her into sitting behind the wheel.

He quietly and patiently gives her a step-by-step instruction. Wendy, a book critic always lost in her thoughts (GREAT trait to have, if you’re a New York City driver), absent-mindedly follows them. And then snaps to attention. Not happening, she says, after getting halfway out of the parking space.

“You have to go forward now,” Darwan prods. “I haven’t taught you to back up.”

The comedy here comes from their gentle, sentimental friendship. Wendy is struggling with the loss of a spouse of 21 years, the fact that maybe her inattention contributed to the split. Darwan has a past of his own, and he’s being nagged into an arranged marriage (to Sarita Choudhury, who first gained fame for “Mississippi Masala”).

“Learning to Drive” was written by the screenwriter of “What Lies Beneath” and directed by the comedy-impaired Isabel Coixet (“Elegy,” “My Life Without Me”). It was conceived as a project aimed at older viewers, and it works well enough — charming scenes, the odd bit of comically frank profanity or explicit sex.

But close-ups here are used as pandering to the actors, not in service of the story. Scene after scene is chopped up with unnecessary attempts at “moments” played with a single face in the frame. The editing is unusual enough to call attention to itself, never a good thing.

The characters are roughed out nicely. Wendy’s temper is always getting the better of her. The lady has quite the foul mouth.

But Kingsley is entirely too stiff and proper in this part to suggest any heat between them, and even if that serves the script, the film cries out for more warmth. It’s a chilly piece, scattered funny situations and laugh-out-loud lines, and a good cast performing them.

“I unfriended God a long time ago.”

A little more of that, and a little less attention to recreating Sikh rituals or Wendy’s ongoing break-up might have helped “Drive” take off.