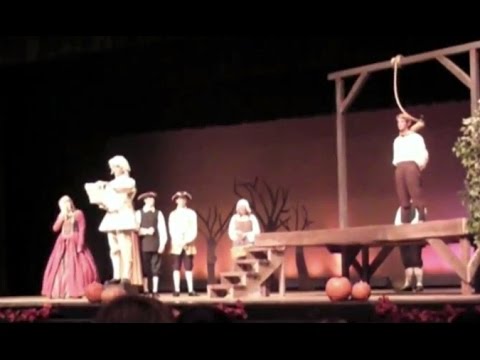 Theaters are such naturally spooky places — with their high, creaking catwalks, echoing stages and trap doors — that it’s no wonder that ghostly superstitions have found a home there.
So it takes some effort to make a laughably bad horror movie set in one. “The Gallows” manages just that, eighty minutes of contrived jolts built into a plot so obvious even the mouth-breather sitting behind you will be able to yell “Foreshadowing” at his even dimmer date.
A Nebraska high school is inexplicably mounting a production of a play that once killed an actor, infamously, on stage in 1993. Four students, some with designs on sabotaging the new production, wind up trapped in the school, after hours, unable to call out or get out as someone — someTHING — comes after them with a noose.
Scare-EEE.
It’s another found-footage horror flick with four actors using their real names — Reese, the would-be jock turned failing thespian (Reese Mishler), Pfeifer (Pfeifer Brown), the “drama queen” and leading lady, Cassidy (Cassidy Gifford), the perky slacker in tight top and tighter shorts, all documented by the loathsomely cynical Ryan (Ryan Shoos), who drags them to school, late at night, with lights and cameras and the idea that they wreck the set to this idiotic and dangerous period piece the school is set to present.
“You’re a terrible actor,” Ryan says to Reese. This is before Reese’s feeble efforts to open the “locked” doors that keep them inside.
“Isn’t this embarassing, dude?” he wants to know. It is.
Reese seizes up, every time he dons the period piece knickers his character in the period piece is meant to be wearing when he’s hung for some crime in the play. He can’t speak to Pfeifer, his over-emoting leading lady. He’s “choking like Charlie” up there, Ryan teases.
Ryan loves to tease. And everybody in town knows what it means to “choke like Charlie.” Charlie was the kid strangled in a prop accident, on stage, in 1993, in an accident videotaped by friends and family. His “ghost” must haunt the theater, which is why Ryan taunts it by shouting his name to the rafters.
Every theater worth its greasepaint is haunted, so all co-writers/directors Travis Cluff and Chris Lofing had to do with invent a clever origin story that brings menace home to modern day student actors. And they can’t. What drama teacher would be able to get a stage revival of a deadly play past her or his school board?
The cast doesn’t help, failing to get across any rising sense of terror about what starts happening to them in the bowels of this dimly-lit high school.
If you’re not laughing at this, early and often, you’re made of sterner stuff than the players they paid to show up for this, but didn’t.

MPAA Rating: R for some disturbing violent content and terror