The winners and heroes in “The Interview” saga? Independent theaters

Posted on December 26, 2014 by rogerinorlando 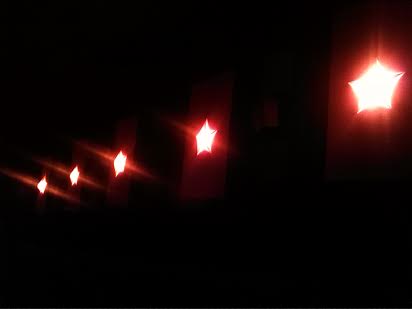 I have been following, with a mixture of interest and annoyance, the whole “Interview” release/threats kill the release/released in spite of the threats saga, much of it on vacation in the remote wilds of rural Va.

The “interest” part was just morbid fascination that a mere movie could turn into a Def Con 3 International incident, thanks to the terrible violation of Sony Pictures’ computer networks, an assault on privacy, personal finance as well as a major movie studio that saw enormous losses thanks to stolen and downloaded films. Every slam at leaked emails re: Adam Sandler or Cameron Crowe or Amy Pascal or Scott Rudin was funny, until you remember how Gawker and others got this private info and distributed it with such glee.

Then there’s the stolen property. One of those swiped films, formerly titled “Rene,” now back to a title that works “To Write Love on Her Arms,” starring Kat Dennings, was made in Orlando and has sought distribution for a couple of years. Now, a March release seems wrecked because thousands of trolls think stealing a movie online is like stealing music online — a “victimless” crime. My auto mechanic, for instance, loves telling me this is how he gets his movies.  God forbid I walk off with assorted Mini Cooper parts from his shop. He wouldn’t get the distinction, or lack of it. He probably doesn’t realize what a s— he is, and how he’s doing North Korea’s dirty work (and that of other content thieves).

My personal annoyance at this debacle is how tricky it turned out to be to see “The Interview” in a theater. Contrary to what the manager of The Plaza, one of the flagship indie cinemas to insist that they’d show the film, causing Sony to change its mind, told the BBC on a broadcast I heard Xmas Day, it showed all over the country, and all over Georgia. I was driving from Va. to Florida and checked in with showtimes in Martinsville, Va., assorted N.C. theaters, Charleston, Savannah and Jacksonville before finally settling on a late afternoon showing at the Satellite 10 in Titusville, Fla., within sight of the Kennedy Space Center. It sold out in larger cities, not in smaller ones. Small town folks weren’t as curious to see what all the fuss was about.

The Satellite booked it into their largest theater, and had about 100 folks in a 350-400 seat cinema for their first showing of the movie.  Ironically, for a movie set in and making fun of North Korea, the Satellite 10 is decorated with gigantic red-star neon lights (see above). Hilarious. I don’t think I was the only one to notice. The film drew a lot of older viewers (probably not their cup of tea), no doubt lured by the patriotic appeal of seeing the movie the Commie dictator didn’t want America to see.

Who came out of this the winner? Sony, which might have gotten the benefit of the doubt from reviewers and patrons thanks to the flagrant assault on free speech that pulling this movie meant, behaved badly. I don’t blame them. The cyber attack was unprecedented and they have been on their heels for weeks, playing defense, doing damage control.  They surrendered, in essence, getting the major theater chains, starting with Carmike and working its way up to Regal, Cinemark and AMC to make the decision to pull the film for them. Cowardly on several counts, so Sony isn’t the winner or the hero here, nor are the theater chains, which would have been on the legal hook for any deadly incident blamed on the movie in their cinemas. Other studios, as George Clooney pointed out in an interview with Deadline.com, failed to back them up. They were ALL worried about people staying away from ALL movies on Xmas Day, not just Sony’s “The Interview.” Cowards. 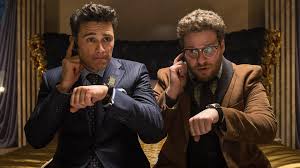 The movie itself scored a few points and will be seen, deservedly so. The idea that nothing brings down dictators quicker than ridicule that gives hope to those they rule isn’t a new one, but it is sharply underlined here. Kim Jong-un has never looked sillier, and that’s saying something for a Buddah-faced baby with a bowl-cut. 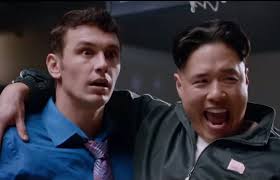 Seth Rogen and James Franco made a passably funny R-rated comedy, but you have to figure whatever “Freedom of Speech” medal we hang on their necks won’t get their phone calls returned the next time they set out to provoke — maybe a movie mocking Islam and its Prophet Muhammad, the last “threat of death” taboo in world culture.

The only participant in the making of the movie to pop out of this as a winner is Randall Park, whose hilarious, subtle and human portrait of The Dear Leader/Supreme Leader/Beloved Leader (who can keep track?) is the best thing in the movie.

But the winners were those small businesses, from Alamo Drafthouse to the Eisenhower 6 (Savannah), from Key West to Caribou, Twin Falls Idaho to Titusville, Fl. They said they’d show it, and did, and reaped rewards. These cinemas are not typically the biggest multiplex, the newest theater. They’re in markets that Regal, AMC and other big boys don’t bother with. Theaters like the Alamo and Plaza in Atlanta, Cinema Village in New York, the Fargo in Fargo, North Dakota, carry indie films, art cinema and foreign movies.

And they cleaned up Christmas Day. Some were equipped to cash in on this, such as the Sun Ray in Jacksonville (midnight showings Christmas Eve). Others just looked a gift horse square in the mouth and went about their business, not over-screening the film (showing it too many times on too big a screen), not hyping it. Just putting in on their website and letting the chips fall where they may.

Early reports say that “The Interview” earned over $1,000,000 on just 250-300 screens. Impressive. That’s more per screen than I would have expected it to earn on ten-15times that many screens, which would have been a normal opening, a $20-30 million weekend would have been a big win for Sony, even before the hack.  But it wouldn’t have made nearly that much without all this buzz. It’s also huge on Youtube and the other streaming sites that released it VOD. But people who watched it at home were lazy and curious. They weren’t supporting the small businesses — indie theaters — under threat. They were padding the bottom line of a company that took a huge business hit but acted rather cravenly when its back was up against the wall.

Regal, AMC and Sony could learn from this experience. As shocking and costly as this was, and not really anything they could have anticipated, I was dismayed, start to finish, by Sony’s reaction to their corporate crisis, and by the lack of soul searching by media entities in gobbling up those “leaks” from the Sony data dump (Who exactly was the intermediary, I wonder? The facilitator of all this personal stuff getting to Gawker, Gannett and CBS?).

I even thought of Sony as I watched Universal’s Xmas Day release “Unbroken” last week. A movie about a WWII POW, it shows haggard, tortured Louis Zamperini in Japanese hands the day WWII ended. Not that the Japanese admitted they surrendered. No more than Japanese Sony Corp did just last week.

So if you see “The Interview,” and if you liked “This is The End,” you should, see it in a THEATER. They’re the ones who deserve your support.

1 Response to The winners and heroes in “The Interview” saga? Independent theaters