“Miss Julie,” August Strindberg’s 19th century drama about class and that Darwinian fixation of the nobility, “breeding,” comes to austere life in an adaptation by the Swedish actress-turned-director Liv Ullmann. She has re-set the Swedish tale in 1890s Ireland, and uses canny casting to underline the connections between class distinctions, then and now.
Though the play is dated and was and remains the very picture of minimalism, Strinderg’s naturalism and a spirited cast give it a pulse that throbs with life.
John (Colin Farrell) is valet to a baron, but a valet with big dreams. Dashing and handsome and a little worldly, he has an intimate relationship with the cook, Kathleen (Samantha Morton). They’re engaged. But John wants more than this simple, servile life.
Which is probably why he endures the dizzy, needy flirtations of the baron’s daughter, Miss Julie. The fact that she’s played by Jessica Chastain helps. “The mistress of the house” is lovely, a little lordly, and likes to dance with the hired hands
On Midsummer’s Eve, the baron is about to return from a trip, so it’s just the three of them in the great house. And Miss Julie is beside herself with…it could be desire, or boredom with a hint of madness. She cannot stay away from John.
“I’ve chosen to forget all rank,” she purrs, imperiously. “And so should you.”
Kathleen and John are powerless in this situation. They’re just the rich young woman’s playthings. Not that John isn’t above playing, or scheming where this play could lead him.
But “They don’t think like that. Not THOSE people.”
During that long afternoon and night, John tries to juggle two women with competing agendas, even as both realize his fecklessness, that he probably doesn’t have the “choice” he thinks he has — between the frumpy, built-for-working-class-comfort Kathleen and the flighty and rich Miss Julie.
Chastain suggests rather more cunning than the typical Miss Julie, a character almost bipolar in her lurch from flirtation to “know your place” snobbery. Morton (“The Messenger,” “In America”) gives away hints of soulfulness in the wounded but never dangerous Kathleen.
And Farrell, given a role of limited canvas but no constraints, reminds us how rare it is for him to have a chance to show us what a wonderful range he has. John’s scheming, masked by compliant servitude, is interrupted by eruptions, a go-for-broke, roll-the-dice gamble on changing his destiny with the mercurial Julie — if only he can catch her on the right moment in her bipolar wanderings.
“Miss Julie” is a handsome production, its few settings (indoors and outdoors) painterly and period-perfect. It’s entirely too long for a filmed chamber drama of such limited stakes. But Ullmann’s adaptation reminds us that the gap between “those people,” now called “the one percent,” and the rest of the world will always be ripe for conflict, drama and tension, no matter how much we evolve. 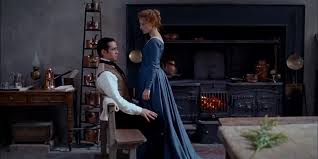