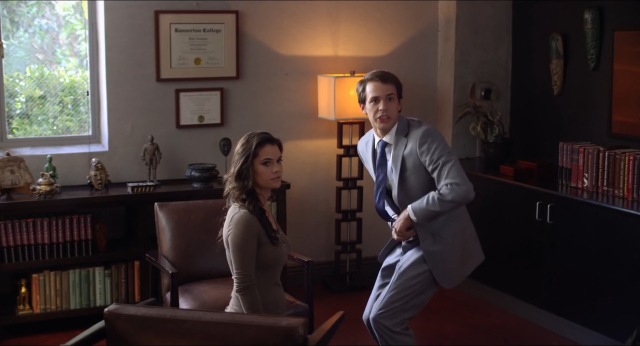 Stand-up comic, impressionist and actor Kevin Pollack steps behind the camera for “The Late Bloomer,” a sweet-spirited if slightly rude rom com masquerading as a sex comedy.

It’s a little flat-footed, with the script-by-committee lacking the nimbleness you want in your stand-up comics or comic films.

But there are lots of laughs – throw away lines, daft cameos. It’s a shame none of them come from the supposedly funny central premise.

Johnny Simmons of “The Perks of Being a Wallflower” stars as Dr. Peter Newmans, a psychotherapist specializing in sex — specifically, all the things you can accomplish if you avoid it. Hes written a book, “From Sex to Success,” about it. His agent (Jane Lynch) has him booked for a NED Talk (TED Talk was taken). He could be “The New Tony Robbins!”

“Instead of copulating, try COMMUNICATING,” he prescribes.

Peter has not just written the book  on how much of our lives is wasted thinking about sex and having it. He’s practiced it. He’s a bit of a hermaphrodite.

Even his cuter-than-cute neighbor (Brittany Snow) can’t seem to, um, get a rise out of Peter.

Turns out, there’s a medical reason for this. He’s had a tumor on his pituitary glands that arrested his development. Take that tumor off, and it’s off to the races — with voice-cracking/zit-creating hormones and erections at the drop of a hat.

The sitcom-cute scenerio gives Pete pals he’s given keys to his apartment (which they abuse) and mismatched parents — Maria Bello is the hippie mom, J.K. Simmons the lovably gruff dad who is awfully proud his 30ish boy is suddenly a Man in Full.

“Whoops! He could put an eye out with that thing! Looks like you’ve got the Sunday Times rolled up in there!” 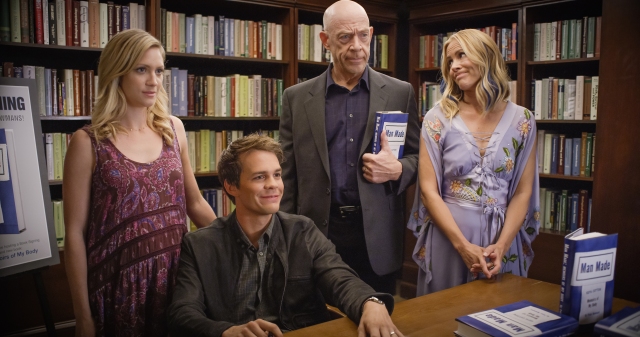 It’s a comedy with six credited writers, and is very much what you’d expect from guys who do stand-up. It’s all-verbal.

The doctor who treats Pete suggests “a CAT scan,” and asks him “How’s your insurance?”

“Yahtzee! Make it a CAT scan AND an MRI!”

Laraine Newman channels Terry Gross to play a public radio show hostess, Ileana Douglas shows up as a sexually frank lesbian and Brian Doyle Murray turns up as a stage hand — each with her or his share of “ba-da-BING” zingers. Paul Wesley is the inattentive, sports-betting beau who pays too little attention to Michelle (Snow), whom Pete pines for.

“Worst officiating since The Kennedy Assassination!”

Young Simmons makes a threadbare farceur, and the characters closest to him — his buds, Luke and Rich (Beck Bennett and Kumail Nanjiani) fail to register. But Bello and J.K. click, and Lynch reminds us that she deserves better than TV’s “Angel from Hell,” or this.

Pollack is obviously persuasive enough to land a lot of big names for this film’s bit parts. As an actor himself, Pollack has been most at home in small parts with just a hint of charm, heart, edge and comic flash. That’s kind of how he directs “The Late Bloomer.” Unfortunately, his leading man is basically a wan cameo in his own movie, not funny enough to hold his own with the big girls and big boys.