Movie Review — Disingenuous Dinesh is back with “Hillary’s America: The Secret History of the Democratic Party” 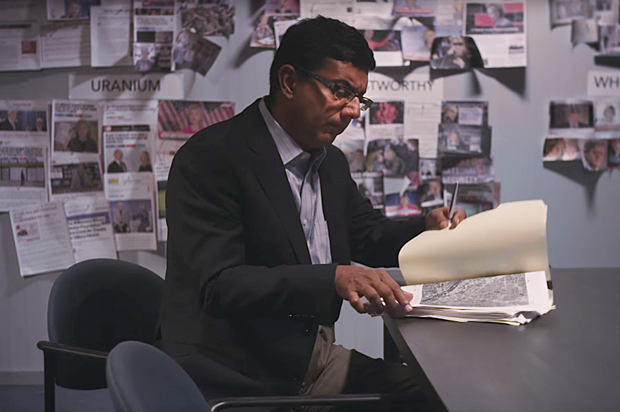 There’s something inherently hilarious about the very idea of Dinesh D’Souza, a smug brown foreign person pandering to elderly, xenophobic white persons as he demonizes the political party that represents most other brown persons in his adopted country.

Not as hilarious as his view of himself, of course. D’Souza, a conservative “scholar,” is a martyr to the cause,  a man sent to prison for trying to buy an election. He recreates his trial and his “prison” experience in his latest documentary, “Hillary’s America: The Secret History of the Democratic Party.”

The fact that he starts his film off with this eye-rolling trial and “hard time” filled with bad actors as smirking reporters and a lecturing judge annoyed at D’Souza’s claims of naivete — and FAILS TO LABEL IT AS RE-CREATED, with actors and editorializing, not real footage — makes you question everything that follows. His latest red meat to the Red States Jeremiad about America — and how this ill-informed Indian immigrant thinks America is going wrong — is laugh out loud hypocrisy for an audience of suckers.

Not that the questions are hard. D’Souza distorts history, defames FDR and LBJ and Margaret Sanger and settles on his favorite whipping boys — the late leftist activist Saul Alinsky and those he claims are doing Alinsky’s “dirty work” — Barack Obama and The Clintons.

But as he panders to an audience that Donald Trump’s candidacy has outed as virulently racist, clinging to the Confederate flag and a political party where KKK members still run for office on the GOP ticket, D’Souza celebrates “The Party of Lincoln,” questions why African Americans abandoned the party that freed the slaves and pushed for equal protection under the law during Reconstruction.

Why do you think, “scholar”?

He demonizes Andrew Jackson, the first Democrat, as a genocidal racist slave owner, but fails to note the legions of Republicans throwing tantrums to keep Andy J. on the $20 bill.

Like that most polished propagandist, Rush Limbaugh, he pushes Goebbels’ “Big Lie,” starting with crediting himself as prophetic with his previous anti-Obama screed, listing all the things he said would come to pass, but didn’t, but which he assures us did. Naked lies play to this crowd.

In Obama’s America, this smirking elitist narrates from the back of his chauffeured luxury SUV (again, irony), rights and the Constitution have been under constant assault. Then he mixes up his early history of the Republican party, builds a vast conspiracy that the Democratic Party has used to keep black people down, and ignores the decades of real scholarship that explain the GOP’s descent into race-baiting, “the Southern strategy” where racists found a political home.

That his many images of the Civil War, heroic boys in blue slaughtering the traitorous racist rebel Southern Democrats under the Stars and Bars, doesn’t grate with his audience should teach him something. This is important history, but ancient history. The recent history is what he needs to ignore. So nothing about Nixon’s “Southern Strategy.” Nothing about Lee Atwater, Jesse Helms, etc. — an endless parade of bigots and race-baiters.

He fills the last 15 minutes of the movie with “God Bless America” and “The Star Spangled Banner” and country music has-been Larry Gatlin singing a patriotic ditty commissioned for the film. Who is gullible enough to fall for this? His target audience should be insulted.

D’Souza, naif to American history that he is, could have done a real service instead of being another right wing Pied Piper leading the lemmings off a cliff. He could have asked “What happened to Our/My Republican Party?” and given blunt, truth-spoken-to-power answers. He’d rather trash the divided America that GOP policies in large part divided

Racial identity voting, which LBJ predicted when he shoved through the Civil Rights and Votings Rights Acts, shifted. Why doesn’t he ask about and explore that? It’s important to the country’s, and the GOP’s future. He could watch HBO’s historically-vetted “LBJ” movie for research. Watch it in the back of his limo.

Nixon deployed “the Southern Strategy” to seize control of the conservative, white South, and people like Bush the Elder played the demonizing black criminals card to win elections. Donald Trump apes Nixon’s infamous “America on fire” 1968 speech at the GOP convention. The party base shrinks and shrinks, the bile builds and builds, and nobody remembers the celebrated GOP past that D’Souza wants to revive.

Elections have to be bought, or gerrymandered, when your base is dying off faster than oxygen-tanked crowd I saw “Hillary’s America” with. The GOP is getting older, whiter, madder and smaller in number. The “Big Tent” is shrinking.

Asking hard questions like “Is there one GOP member of Congress who would support one piece of Civil Rights or Reconstruction legislation today?” and “Why not?” would be helpful, to his adopted country and D’Souza’s adopted party. I’m being serious.

Does D’Souza even know that there used to be something called a “liberal Republican”?

The answer to all this is “No.” Or it doesn’t serve D’Souza’s pandering need to pack his pocketbook. When it comes to American history, the only real lesson he’s learned is credited to P.T. Barnum.

“There’s a sucker born every minute.”

MPAA Rating:PG-13 for some violence, thematic elements and smoking

7 Responses to Movie Review — Disingenuous Dinesh is back with “Hillary’s America: The Secret History of the Democratic Party”