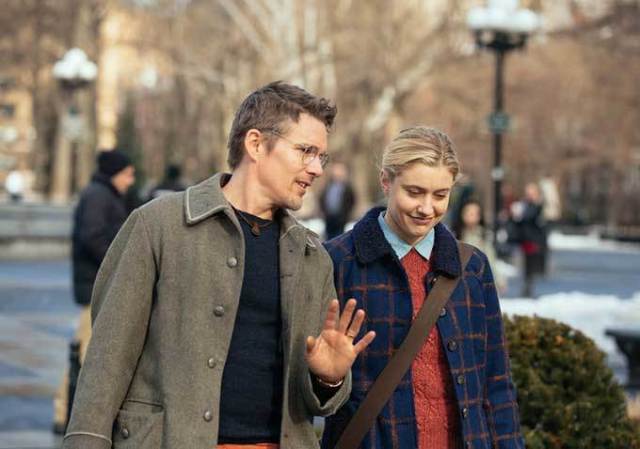 A tale of pretentious academics in love, infidelity, and “Let’s get you two back together” manipulations, with plucked guitar jazz in the score and oodles of Manhattan locations, director Rebecca Miller had to be expecting that inevitable Allen comparison.

Which is why she improved on the exhausted Allen formula. The performances are funny, but err on the side of natural — not the arch, stagey inventions of Allen’s last 30 years. They talk like real people. The romance, when it hits, hurts. And when love ends or takes a detour, there’s bite to the bitterness.

Greta Gerwig has the title role and toned down her “Mumblecore” affectations for her most touching performance. Maggie’s “plan,” outlined to her onetime college beau (Bill Hader,  is to have a child. No husband because, “Let’s face it,” she hasn’t ever taken a relationship past the six month mark.

That “Let’s face it” line may be the lone cliche in the Karen Rinaldi/Rebecca Miller script. We’re only subjected to a single scene of “I’m just facing the truth about myself” retreads, which Tony (Hader) isn’t buying, and the “Plan” is set in motion.

There’s a “pickle entrepreneur” (Travis Fimmel of TV’s “Vikings”) she has in mind for the donor. There’s a gawky chivalry — he’s a little smitten — to Guy that Maggie rejects out of hand. An academic at The New School, she’s too organized and into a life of the mind to consider this awkward hipster.

Which is how she falls for her colleague, the”ficto-cultural anthropologist” John. He’s given a faintly-downtrodden air by Ethan Hawke, playing another “blocked novelist.”

They meet, she takes an interest in his interest, and reads his novel-in-progress. And from that autobiographical book and John’s complaints, she picks up on his unhappy marriage. His self-absorbed Scandinavian academic wife, Georgette (Julianne Moore) undervalues him, lets him raise their two kids.

“Maggie’s Plan” becomes “Maggie’s Back-Up Plan” thanks to what happens after that.

The story hangs on a series of Shakespearean manipulations and under-estimations. Maggie, for starters, is never given any credit. Gerwig’s “adorable ditz” baggage may have been kicked to the curb for this performance, but we instantly do what Tony, John and Georgette, and John and Georgette’s kids (who speak Danish when they insult Maggie to her face) do. We take her lightly, figure she’s naive at best.

“”You are such a hall monitor!” John complains of the organized young woman he nicknames “”Little Miss Quaker two-shoes,” riffing on her childhood religion.

“Am I so capable that I never deserve any attention?” Maggie wonders.

The Oscar winning Moore slings just enough of an accent for her lines to be funny. Her top-knot hairstyle says everything about the character we need to know — frosty, severe.

“I detest ze role of ze spurned wife. I von’t play it!”

Miller knows the rules of a romantic comedy, so the “surprises” here are more twists that shocks. But Moore, Hawke, Gerwig amd Hader and for that matter Maya Rudolph (as Tony’s wife) all play this as if they’ve never read a play, never heard that there’s an inevitable happy ending for all these complications.

They never let on that they know that in life, as in this movie, it that ending won’t be the one we’ve planned.

MPAA Rating:R for language and some sexuality (nudity)