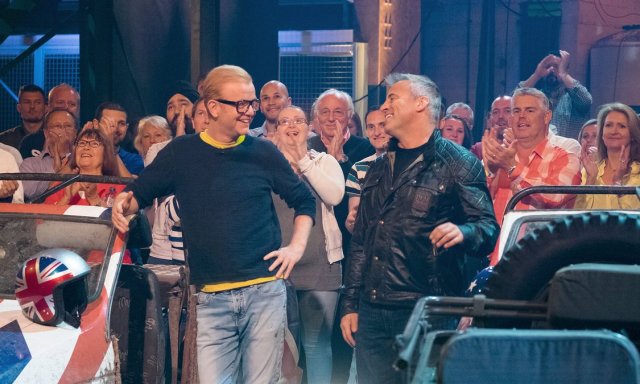 They didn’t change enough of the show’s format — which had sagged along with Jeremy Clarkson’s jowls and loose-fit jeans — to avoid direct comparison.

Chris Evans, sort of the bastard Michael Caine glasses-wearing child of Roddy McDowell and Ron Weasley, is going to take some getting used to.

The chemistry and banter seemed a bit forced, with both new co-hosts making nice and playing together even when they were supposed to be competing.

The bits they managed in the premiere of series 23 of “Top Gear” in its current millennial incarnation,  offered few surprises. Raves about a butt-ugly winged Dodge Viper (fast, but the wing looks like a tuner’s add-on). A “dogfight” involving the most promising of the third wheels among their supporting cast — Sabine Schmitz — who brings German bluntness and profanity to the proceedings (she crapped all over a Corvette she was racing the Viper with). “Piece of —t,” she mutters about the suspension. “Like a Ferrari.” 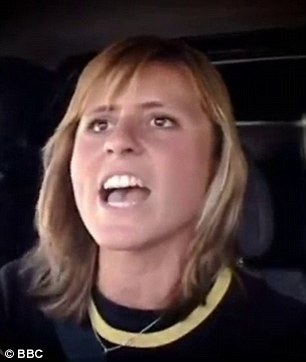 Another bashing of a Reliant three wheeler, this time involving ANOTHER race to Blackpool. Really?

The new “Gear” is much the same as the old. Too much.

Chris Evans, who made his bones and his fortune used for car collecting on British radio, is trying awfully hard, but may grow on me. Matt LeBlanc? He’s doing exactly as one would expect — droll, funny (he’d do better with writers, or better writing) and stupidly competent with whatever they put him behind the wheel of. LeBlanc dominated the pilot simply by being more at ease and not trying that hard. Some said he seemed bored. He’s been underplaying “himself” ever since he came to the UK.

But give them credit. The new more Americanized “Top Gear” went where the British show, in 22 seasons, dared not go.

A direct Land Rover vs. Jeep comparison was scrupulously, hilariously avoided by the jingoistic Jezzers and his mates for over a decade on old “Top Gear.”

Stuck in the jungles of South America? Hunting the source of the Nile?
The obvious choice in such an adventure was the one they dared not let anybody make. A Jeep. Assorted Japanese and British and even Swedish vehicles were proffered.

Because otherwise, the guy with the Jeep would have won — crossed the desert, climbed the mountain, towed the other junkers out of the muck. There is only One Jeep.

The finale of the Clarkson/May/Hammond series was the one and only time they dared work a Jeep (Cherokee) into their “challenges.” And that was made up of segments they hadn’t wanted to use, but had to after Clarkson was fired.

This time, they threw a first gen (“Series One”) Land Rover up against the Willys 4X4 that won WWII, with predictable results. British cheating notwithstanding.

My gut reaction to this 90 minute premiere was, “Boy, the Brits are going to be pissed.”

American co-host, a rejiggering of the “star in a reasonably priced car” that pitted Gordon Ramsay against American movie star Jesse Eisenberg (Guess who won THAT?),two American cars in their first comparison contest, and stating the bloody obvious re: 4x4s. Jeeps have always had the measure of the leaky, latterly luxurious Land Rovers.

This show is plainly pandering to an American audience that still hasn’t warmed to the US version of the popular British car show. It could do better in the US than it does in the UK and the BBC would be giggling all the way to Barclay’s.

But I don’t blame the Brits for feeling a pit put out. Or chaffed.

They upgraded the “reasonably priced car” (no longer called that) to a Mini Cooper, and took it into the mud (an offroad portion of the track). Smart.

The Stig is still around, used in more comic bits. Fine.

There’s a second “after” show allowing the BBC to test out the other co-hosts to see who might be up to playing on the A-team, “Extra Gear.” More money for the BBC, too, for that one. This has become a “thing” on US cable. If the “Real Housewives” and “Walking Dead” can have a show AFTER their shows, why not “Top Gear”?

So I’m more than willing to stick with this one to give it a chance. Evans is obviously an enthusiast, LeBlanc more than his equal but generous. And the “old” “Top Gear” didn’t really hit its stride until bon vivant and pedant James May joined the team, and they started seriously taking off on big trips — the North Pole, the Middle East, Africa, Vietnam, Burma, etc. That was a couple of years into that “new” series.

The BBC hid the first season of the rebooted “Top Gear”, which had basically only Jeremy Clarkson, from DVD release, reruns etc. Because it sucked. Second season wasn’t much better and is similarly hidden. May shows up, and it finally works.

The big question is, will the British audience remember that slow start to the last version and stick with the show as well? It could take years, and I don’t think they have that.