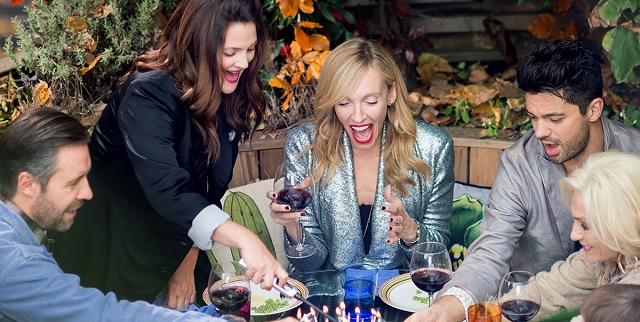 “Miss You Already” may be the funniest, sunniest weeper in history.

It’s a standard issue Drew Barrymore indie chick pic, with Barrymore cast against type as the stable one, the responsible one, the lovelorn lass playing catch-up to the flashier, more “out there” friend.

It’s also a movie that plays catch-up to a dreadful opening. If “Love  the Coopers” dies pretty much the moment Steve Martin narrates, “Ah, the holidays,” then “Miss You Already” barely escapes a coma when Drew’s character Jess, launches into “Ah, childbirth — the most beautiful experience in a woman’s life.”

But then we leave the maternity ward where Jess is about to give birth and flash back to her relationship with the best friend who is absent in that opening.

Jess was the American raised in the UK, Milly, played by the fabulous Toni Collette, was the friend, through thick and thin, who helped her fit in.

“Miss You Already” gives us suggestions of their wild and carefree pasts. But Milly got pregnant and married a would-be rocker (Dominic Cooper), had kids and built a PR career.

Jess fell in with oil worker Jago (Paddy Considine), tried to get pregnant and strained, just a bit, to get out of her friend’s larger than life shadow.

Their banter is knowing and affectionate, even when Milly is diagnosed with breast cancer.

“How could the tumor have gotten so big?”

Everything swirls around Milly’s illness, with her actress-mom (Jacqueline Bisset) and husband and Jess forming a support system. The fertility treatments may go on. But Jess’s life, her beau tells her, is permanently on-hold. When will they “produce an heir to my extensive power tool collection?”

Collette lets us feel the gut-punched shock of the diagnosis, the rattled resolve to carry on as things grow dire. And the writing lets Milly give a power point presentation to her little kids explaining chemotherapy.

Milly makes her last lash-outs of impulse. They’re both Bronte fans, so a trip to the moors of “Wuthering Heights” is in order. Milly grasps for a final fling (Tyson Ritter of the band The All American Rejects).

The twist here is that she is robbing the magic of Jess’s most blessed event, a “cancer bully” who has her best excuse for making it all about her.

It’s funny, casting Barrymore as the stoic one and Collette as the hard-drinking, shirt-lifting tart. That’s barely enough to sustain a “Saturday Night Live” sketch, not a movie.

But with Catherine “Twilight” Hardwicke behind the camera, the players enrich this, create a relationship we can believe in and a medical prognosis that is both tragic, and something they can joke about.

“Miss You Already” may have its trite touches, the clunkiest narration this side of that Christmas movie narrated by the dog. It still fills a  gaping hole in the middle of our cinematic psyches, a movie that lets us cry, but laugh through the tears.

MPAA Rating:PG-13 for thematic content, sexual material and some language