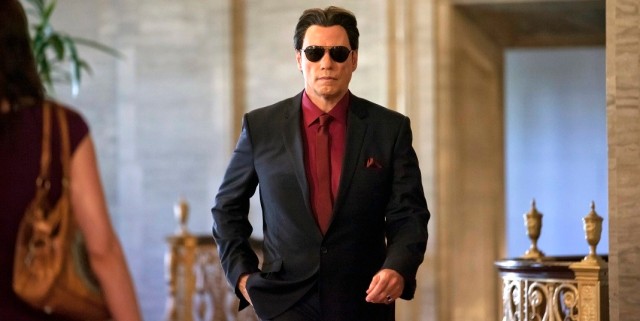 It should never come as a surprise that a former child actor who has managed a solid and long-lived career in the movies knows enough to step behind the camera with confidence.

Ron Howard did it. Why not Jackie Earle Haley?

“Criminal Activities” is a surehanded, tight and minimalist amateur-kidnapping thriller that benefits from a cast of some repute and a few nods to Tarantino within its 94 minutes. It kind of comes to pieces at the end, as too many movies do. But Haley, of “Breaking Away” and “The Watchman” and scores of films in between, acquits himself well in his directing debut.

Michael Pitt, Rob Brown, Christopher Abbott are four pals reunited by the tragic death of a former classmate. They’ve barely toted Matthew’s coffin to the grave before the griping about the current state of their lives begins. One’s just 22 days sober, another has a detective following his cheating fiance.

But Bryce (Brown) has a hot stock tip. And the wussy but well-connected Noah (Dan Stevens of “Downton Abbey”) says he has access to the money.

The deal turns out to be a bust, Noah’s cash turns out to be mob connected. And the sharp-dressed Eddie with a lot of vowels in his last name (John Travolta) wants that cash back. He has a proposal, an offer they cannot refuse. Kidnap this relative of the leader of a rival mob so that he can be exchanged for a relative of Eddie’s who is being held hostage.

Robert Lowell’s script skips over some of the standard issue “prepare for the heist” stuff. The  guys just show up where the menacing Marques (Edi Gathegi) is eating with pals, grab him in the toilet and stuff him into the trunk of a car.

That van that chases them? Those were the Feds, listening in on Marques. Turns out Eddie Lovato’s goons (Haley plays his ice-blooded right-hand man) and Marques’ gang aren’t the only people who want to know where he is, and what these four non-mob guys will do to him.

Aside from stupidly show him their faces. And accidentally give him their names. And listen to his endless tirade of threats, bribes and philosophy-of-life rambles.

Travolta essentially plays another version of Chili Palmer from “Get Shorty.” Overdressed, same time-defying hairline, more capable of violence than willing to demonstrate it, a jogger sucking down wheatgrass (or worse) milkshakes.

Of all the talkers in “Criminal Activities,” he’s the talkiest. He starts by explaining “the seven rules of economics” — “scarcity, inequality,” etc. He quotes “Macbeth.” He looks smart and sharp and scary.

Ever since “Reservoir Dogs,” thrillers of this ilk have been chatty affairs, with the various characters pausing to deliver monologues and pithy punch lines.

“We have Snoop Dogg’s cousin tied up in here!”

Noah can’t do the really dangerous stuff, because, you know, he’s a fraidy cat.

“Did I ever tell you guys how I got this scar on my ear?”

That last line, delivered by Haley’s character, connects “Criminal” to its Tarantino roots, delivering a flashback that plays like an outtake from “True Romance.”

But as flattering as those echoes of earlier, tougher and tighter scripts are, as good as Haley and Pitt and Stevens and Gathegi and yes, Travolta are, “Criminal Activities” cannot help but unravel. Lowell cannot let the story follow a totally conventional path, and that leads to a third act with semi-surprises and way too much explaining away of those jolts.

That makes the crooked path “Criminal Activities” take so twisted that it trips itself up, no matter how good the players or how competent the director.