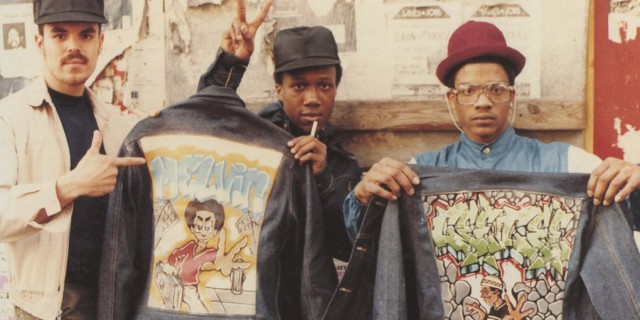 The rise, fall and mainstreaming of hip hop fashion is explored in Sacha Jenkins’ “Fresh Dressed,” a documentary that visits an under explored corner of rap music history.
Jenkins’ film details the sartorial statement that arrived, almost simultaneously, when hip hop music, rap and break dancing broke out of New York in the late ”70s and made an imprint on every corner of popular culture.
It started with sneakers, the Adidas “with fat laces” that became a signature, kids dressing up their basketball shoes in ways that forced sneaker manufacturers to take notice. Jackets evolved from gang colors to Cross Colours, blinged and bedazzled, over sized and in dazzling shades.
The singer Nas makes the obvious comparison — “peacocks.” Soon, these peacocking performers were picking up on the fact that their fans were emulating their look. From “Yo! MTV Raps” onward, you didn’t arrive on top of the music world without making a play for the big bucks that the fashion you were dictating was generating.
From Sean Combs and Russell Simmons to Pharrell Williams and Kanye West, everybody with a couple of hits had to have a clothing line. Music had never seen this before.
The biggest failing of Jenkins’ account of this pre-history (African American church wear, Little Richard’s flamboyant stage outfits) to today is the lack of female faces and voices. “Fresh Dressed” strains to include women, and overuses the few female faces who agreed to appear in it. Other seminal figures, from LL Cool J to Russell Simmons and Beyonce, are conspicuous in their absence.
Academics and Vogue fashion maven Andre Leon Talley describe the various sub trends within this world, others remember the distinctive traits of Brooklyn hop hop wear vs. The Queens, the Bronx or Harlem style.
Christopher “Kid” Reid of Kid n Play is among those who comments on the origins of the fashion and the slang (“vicks” — victims of shoe or jacket robbery, “Jew Man,” cut-rate Jewish clothiers popular among urban youth of New York) that came along with it.
It morphed from what was labeled “urban fashion” into something Tommy Hilfiger and others got a piece of. The copyright violations of Dapper Dan (“I just BLACKenized it!”) forced major European fashion houses to get into this lucrative, worldwide style trend where they all but co-opted it.
Not that Fubu, Sean John, Ecko or Billionaire Boys Club are going away any time soon.