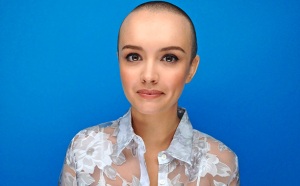 You can’t make a movie out of the tragicomic novel “Me and Earl and the Dying Girl” without the perfect, terminally ill final third character in that title. The film’s director, Alfonso Gomez-Rejon cast about and found someone in a genre that both he and she are well-versed in — horror.
“It’s a very expressive genre,” says Gomez-Rejon, who directed episodes of TV’s “American Horror Story” and the big screen “The Town That Dreaded Sundown.” He found his “Dying Girl” on TV’s “Bates Motel.” But young Brit Olivia Cooke’s resume includes the British horror thriller “The Quiet Ones,” as well as “Ouija” and the supernatural thriller “The Signal.” Gomez-Rejon saw talent and a kindred spirit in the 21 year-old Cooke.
“Horror has allowed both of us an opportunity to show what you can do,” he says. “This film let us both show something deeper. She had to be someone who could be funny without trying to be funny. She’s confident, like Rachel, her character…She commands her scenes, and handles even the toughest emotional moments with such grace.”
Cooke, whose character is diagnosed with terminal cancer and is reluctantly befriended by two high school filmmaker/classmates, chose to shave her head for her chemo scenes.
“There are plenty of young actresses who wouldn’t dare to be seen bald, and a whole other group who would have made a big fuss of it, but Cooke approaches the role with quiet dignity,” critic Peter Debruge wrote in his rave review of “Me and Earl” in Variety. But when your first leading lady role had you crazy, disheveled, in various states of self-injured undress in “The Quiet Ones,” shaving your head’s nothing, right?
“I don’t think horror taught me much of anything,” Cooke says with a laugh, noting how “Quiet Ones” was the one great experience she’s had with the genre. But “I never went to drama school. I’m winging it, doing my own thing. So maybe I ‘went to school’ in those films. Horror certainly taught me to be patient, and to appreciate a really good script and the chance to do something that proves I can do other things.”
Cooke’s close enough to her teens that she respected the characters in Jesse Andrews’ script (he also wrote the novel this is based on) for “how real they feel. I liked the fact that as written, Rachel was a young woman who liked herself — not this stereotypical teenager who hates her looks, her whatever.
“These movies are too often conceived by 50 year-old men writing in their swanky apartments in Burbank. They make girls like this riddled with insecurities and self-deprecation. The girls never seem to like themselves. I was a girl who liked myself.”
While Cooke can be excused for the 21 year-old’s view that 50 year-old-men write teen romances in Hollywood (50 year old studio execs pay 28 year-old screenwriters to write these movies), her observations about her peers seem on the money.
“I know the thing with teenagers, with me back then and with my 15 year-old sister now, is there’s no filter. At that age, you’ve not had to use tact or put empathy into practice. That’s what Rachel teaches Greg (Thomas Mann). She’s already come of age, grown up a little, by the time we meet her. What she gives him is the chance to care for another person in a way that’s not self-serving.”
Greg doesn’t so much fall in love with Rachel as make a friend, and learn from her. And Rachel makes real friends at a time in her life when she fears people are just taking pity on her.
The rapturous praise that “Me and Earl and the Dying Girl” is earning from critics suggest this could be a game changer for an actress who might have been destined to become a “scream queen.” Cooke has “Katie Says Goodbye,” a drama about an Arizona waitress so desperate to leave her small town that she turns to prostitution, in production.
Her unfiltered age and newness to the business make this the perfect time to ask what she wants out of this career. A flip “To challenge myself, to not be found out!” is followed by something more thoughtful, Olivia Cooke’s list of “no nos.” She doesn’t want to become “a brand. Not the least bit interested in that. All this social media nonsense, where’s the mystery? I want to remain a little mysterious! I’m not up to being funny on all the chat-show interviews. It’s just a job, at the end of the day.”
But her director thinks she’s selling herself short. Just a little.
“All these things that Rachel is, brave and scared, lonely and real — Olivia was able to do it all, right in the audition,” Gomez-Rejon says. Her future could not be brighter, after this film.
“Because, it turns out, she’s not just a ‘horror girl.'” 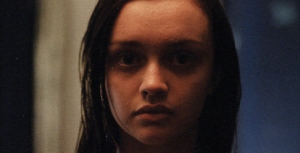