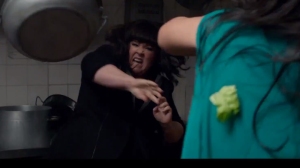 So here’s how director and his muse guarantee uniform good notices for their latest comic teaming. Get collectively bent out of shape when critics abuse you for your over-reliance on “fat jokes.” Make people feel sorry for Melissa McCarthy, when we’re just supposed to find her funny.

Then flip that script, eschew Weight Watchers humor, spend some money on a supporting cast and a stunt team, and make Melissa simply underestimated, not roly poly and in denial about it.

“Spy” is a perfectly amusing comedy every time McCarthy’s out-of-her-depth desk jockey agent is paired up with Jason Statham and Miranda Hart and Peter Serafinowicz. It’s never less than watchable with her opposite Jude Law and her “Bridesmaids” bud Rose Byrne.

The 94% positive rating on Rottentomatoes is misleading. Check out the grade of 74 on Metacritic. More accurate. I gave it 2.5 stars — funny, WAY too long, more hit than miss, but still hit or miss. It turns into more standard issue swagger and swearing McCarthy, throwing her weight around, in the third act. But it’s a refreshing riff on Bond and Bourne.

“Love & Mercy” is a very good Beach Boys biopic built around the peak years, and late life comeback of Brian Wilson. Paul Dano dazzles as the younger genius, cooking up “Pet Sounds.” John Cusack is good enough as the later life Wilson, messed up, under the thumb of a mental health quack/bully  (Paul Giamatti). Great reviews all over for this one.

“Entourage,” the movie nobody asked for based on a TV show that ran its course years ago, got a few good reviews. Those people must’ve seen it at theaters that serve alcohol. Stale, played, actors moving at half speed playing characters that have nothing new to say. Meh.

“Insidious: Chapter 3” got just enough good notices to merit “fresh” on rottentomatoes. I liked it, found the finale moving and enjoyed Lin Shaye’s moment in the spotlight.

“Testament of Youth” is a quietly compelling anti-war film based on Vera Brittain’s famed WWI memoir. It’s how pacifism, in its modern sense, was born. Another amazing turn by Alicia Vikander.