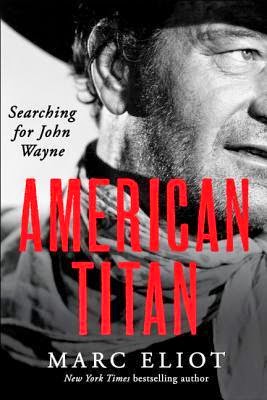 There’s a lot about John Wayne that I didn’t know before picking up Marc Eliot’s “American Titan,” the latest Wayne bio. From his Oscar night kick down of the door to Taylor and Burton’s bungalow (cool), to more rational explanations of Wayne’s wingnut turn after dodging the WWII draft, to his propping up the alcoholic John Ford for the last 20 years of Ford’s career, there’s much to chew on. But Wayne deserves a better written, better buttressed and better EDITED book than this. Factual blunders, botched names and simple typos jump off every page. When you get the most famous quote from “The Man Who Shot Liberty Valance” wrong, you don’t get a contract to hack out a book about John Wayne. One shudders at what the proofs to this looked like.
He’s talking about Howard Hawks and it becomes “Hanks,” “felt” becomes “feld,” and “When the truth becomes legend, print the legend” becomes…”print the truth.” Seriously?

He says “The Alamo,” which cost $17 million+, needed to earn “$4 million” for Wayne to break even. HarperCollins, hire some editors, or get out of the business of hiring people who need editing. As we all do. But Marc Eliot writes like a blogger — blundering, unpolished, typo and error-packed piffle.