Posted on December 22, 2014 by rogerinorlando 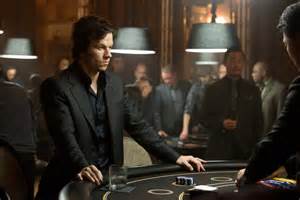 Mark Wahlberg takes on his most ambitious acting job ever in “The Gambler,” a gritty remake of a 1974 film that starred James Caan. And the new gambler doesn’t embarrass himself.
Playing a college professor addicted to losing, digging a deeper and deeper hole for himself with loan sharks, underworld gambling entrepreneurs and his family, Wahlberg never gives away the game — that long, erudite speeches about Shakespeare and Camus are not his forte.
But as Jim Bennett, one-time novelist turned arrogant assistant college professor with a gambling problem, Wahlberg also fails to let us taste the desperation. His fatalism — written into the character by William “The Departed” Monahan– locks the door on panic, and empathy. We see the clock ticking down on his debts, his repeated treks for cash to pay back what he owes, money that he then gambles away. We note his efforts to fight his attraction for the one promising student in his otherwise bored class (Brie Larson). And we never see him sweat. So it’s an impressive performance, not a moving one.
For Bennett, “Life’s a losing proposition. Might as well get it over with.”
That’s why he’s deep into debt with the shady Korean gambling mogul, Mr. Lee (Alvin Ing), willing to dive into dept with the even more dangerous Neville (Michael K. Williams, silky smooth) and hoping to get the massive, aged King of the Sharks, Frank (John Goodman) to lend him the cash that might cover his losses to the first two.
“Going on as I am is the only thing I’ve got,” he tells his mother, given a desperate fury by the great Jessica Lange. She can’t stop Jim any more than the threats made by the others.
“He wants to dance with the devil,” and that’s that.
Jim published a novel, “one of the best-reviewed first novels of 2007,” Neville cracks. But he realized his destiny with that book. And mediocrity was never going to be enough for a child of privilege, of intellectual advantage. “Victory or death” is his credo, which only partially explains why we see him, time and again, “double-or-nothing” his way out of a winning streak at blackjack or roulette.
Every character in this Rupert Wyatt (“Rise of the Planet of the Apes”) film is an articulate, quotable archetype-breaker — from the verbose and literary lowlifes who inhabit Jim’s secret world, to the students — even the jocks — who sit through his showboating, confessional, profane and semi-profound lectures.
The arrogant jerk cannot answer the challenge of a student athlete (Anthony Kelley) — “You’ve got a BMW M-1. How are you not happy?” He cannot learn the basic gambler’s lesson that Frank passes on between threats.
“You get up, you get out.” Jim never quits while he’s ahead.
But as meaty as this script sounds — every line another morsel — it never allows Wahlberg the chance to make us care what happens to Jim. Do we want him to get what’s coming to him, or are we rooting for him? Either way, Wyatt, Monahan and Wahlberg succeed only in frustrating our will, cashing out with a cop-out finale, making our two hour gamble on “The Gambler” something less than a sure thing.

1 Response to Movie Review: “The Gambler”