Movie Review : “Into the Woods”

“Into the Woods,” the Stephen Sondheim fairy-tale musical that sent up every contrivance and cliche that The Brothers Grimm could cook up, earns a lush, grand and star-studded production for the big screen. Disney brought out and bought the big guns — director Rob “Chicago” Marshall, Meryl “Mamma Mia!” Streep and Anna “Pitch Perfect” Kendrick.
There’s even a role for the one-time rocker turned Captain Jack Sparrow, Johnny Depp, in this no-expense-spared extravaganza.
But that bigness is only a burden when you see some of your favorite fairytale figures shortchanged in the trimmed-down film, when you fret over the weaker voices and less charismatic players cast in lesser parts.
And if it’s still long enough to be wearying, blame James Lapine and Sondheim, whose original show was longer and so richly detailed that it inspired everything from “Wicked” to Disney’s “Enchanted” and “Tangled.”
A baker (James Corden) and his wife (Emily Blunt, a vocal surprise) live under a curse of childlessness. The witch (Streep, stunning) who holds that curse over them offers an escape clause. They can go into the woods and fetch the cow from “Jack and the Beanstalk,” the cowl from “Red Riding Hood,” a slipper from “Cinderella” and a lock of Rapunzel’s golden hair, and she’ll call it quits on the curse.
Of course, the couple doesn’t know these talismans belong to those characters. But stumbling through the woods, they intercept dopey young Jack (Daniel Huttlestone) on the way to the market, sent by his mum (Tracey Ullman) to sell the cow. There’s Rapunzel (Mackenzie Mauzy), pining away in her tower, sassy-brassy Red Riding Hood (Lilla Crawford, a hoot) on her way to granny’s.
And Cinderella (Kendrick, spot on) is making her way, night after night, into a prince’s (Chris Pine) festival ball, escaping his clutches before each midnight.
Crawford has the biggest “stage” voice here, but Streep’s preparation has turned her into a real Broadway baby. Her various witch laments are musical highlights of a show best known for its title tune and “Children Will Listen.”
Depp’s whiskers-twirling turn as the Big Bad Wolf is a stitch. But if you know “Red Riding Hood” at all, you know he won’t be around for encores.
Pine, apparently doing his own singing, and Billy Magnussen (as Rapunzel’s princely suitor) stop the show with “Agony,” a mock-comic duet about true truer truest prince-love which Pine just vamps up and kills. It’s so good that even if you’ve never seen the stage product, you miss the second act reprise of the show’s comic highlight, edited out here. 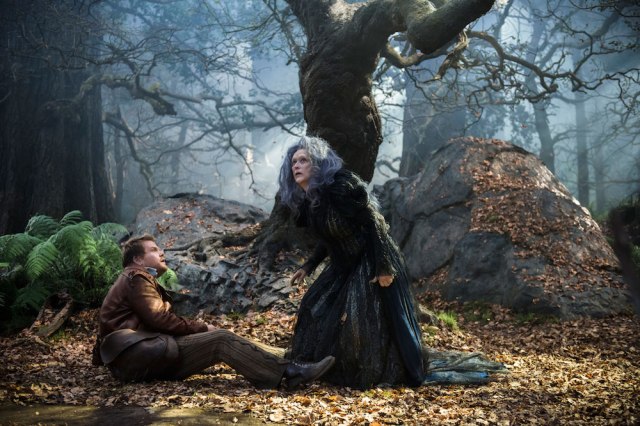 Sondheim’s tongue-twisting, footnotable psycho-babble lyrics challenge one and all, and none will have you humming the tune as you leave the theater. And despite the editing, the predictable story tends to seriously drag in the second act, when lesser lights make us long for the return of the princes, Cinderella or The Witch..
But Streep, Marshall & Co. still manage to do the “Woods” justice. And if it’s more impressive than embraceable, remember your Sondheim (“Sweeney Todd,” “A Little Night Music,” etc.). That’s kind of his thing.

Credits: Directed by Rob Marshall, written by James Lapine, based on the musical by Stephen Sondheim and James Lapine. A Walt Disney IFC release.