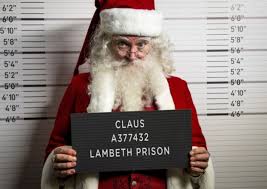 Prison doesn’t suit Santa. Yeah, his long white hair and beard are perfectly
weavable into prison dreadlocks. Call him “Mad” Jimmy Claus and try to get him
to talk tough, maybe the other cons won’t eat him alive.
But surely his jolly demeanor, his hearty “Ho Ho Hos,” his firm grasp of the
other inmates’ childhoods — what they begged for in their Letters to Santa,
long ago — will get him through.
“Get Santa” is an at-times adorably daft holiday farce from those blasphemous
Brits. Writer-director Christopher Smith cast jovial Jim Broadbent as an
out-of-sorts St. Nick, scatter his reindeer across London — loose on the Tower
Bridge, for instance — and have a little boy (Kit Connor) bully his ex-con dad
(Rafe Spall) into helping him “Save Christmas,” and you’ve got something cute,
if not exactly a new holiday classic.
Santa loses his reindeer, so he visits young Tom (Connor). Father Christmas
needs Tom’s dad, Steve (Spall). And not because Steve’s a get-away driver. The
ex-con once saw He Whom No Child Must See, long ago. Steve believes. Or will,
when he’s reminded of it.
Steve has an ex-wife, visitation rights and a no-nonsense probation officer.
He isn’t having this, no matter how convincing the suit and beard are.
“Are you on medication? Or worse, are you OFF your medication?”
Santa’s efforts to retrieve his reindeer from various animal control shelters
get him arrested. So Tom browbeats poor Steve into helping, probation be damned.
Cool effect? Santa magically attracts every letter that’s written to him. You
lose Santa, just write him a note and the paper flies off until it’s in his
hands.
Kid friendliest gag? Reindeer, especially Dasher, communicate with humans
through flatulence. That’s right, reindeer farts.
Best cameo? Warwick Davis, of “Star Wars” and “Willow” and various Harry
Potter pictures, one of the most famous Little People in Britain. No, he’s not
an elf. He’s an inmate.
Best image? Santa, counseled and made-over by the prison barber, walks
through Lambeth Prison in the aforementioned dreadlocks.
“Oy! Santa! You gonna escape up the CHIMNEY?”
Whatever else “Get Santa” has or hasn’t got going for it, you will spit up
your soft-drink over the sight of the Oscar-winning Broadbent, befuddled and
bemused as a Rasta-ready Santa just trying to fit in amongst the cons.