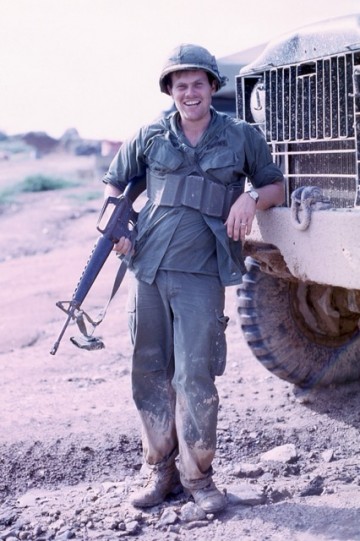 But Soren Sorensen’s “My Father’s Vietnam” manages to be both personal and informative, a memoir of a time now fading into ancient history as remembered by those who lived through it.

Sorensen’s father Peter is the subject of the film, a man who took his son with him to Washington when the boy was ten. He did pencil rubbings of two names on the Vietnam Veterans’ Memorial, Maya Lin’s masterfully moving and stunningly simple tribute to the war and those who died there. Soren saw his dad’s eyes well up with tears.

“I was hardly old enough to comprehend it,” the son narrates.

His film is about his father’s experience of the conflict, and memories of those two names he tracked down on the wall. The younger Sorensen visited those who loved or served with the two dead soldiers, has them read from the letters (Loring Bailey, Jr. was an aspiring writer and his letters are articulate and beautifully detailed) they sent home.

Peter Sorensen, speaking to his son, reminds us that history has over-simplified Vietnam. Young men enlisted in the military as part of a long family tradition, to “do their part” in a way the small towns they grew up in expected them to. Peter felt “It was a bogus war,” even then. But he’d do his part.

And they wanted some control over what they ended up doing in the armed forces, unlike a draftee. Peter Sorensen’s strategy was “beat the clock.”

“The National Guard was closed-out, unless your name was ‘Bush.'”

He’d enlist, stretch out his time in officer candidate school, and maybe Nixon’s “secret plan to end the war” would kick in and save him the overseas trip.

Instead, he was put in combat engineers, then re-assigned as public information officer — a Hemingway buff and aspiring journalist getting his chance to cover the war from the military’s point of view for military publications.

Loring Bailey Jr. and Glenn Rickert were people he knew In Country. And they died.

The younger Sorensen’s film covers familiar ground, and spends a lot of time with Bailey’s surviving brother-in-law, Rik Carlson. He was a war protester who refused to serve (did time in an Army prison for it), and the film reminds us of what a tiny minority groups such as the Students for a Democratic Society and Weather Underground actually were.

Nowadays, we believe EVERYbody was against the war. Sort of like the way a previous generation of France figured EVERYbody was in the Resistance.

Dad’s combat zone photos are used liberally throughout the film, along with newsreel footage, all of which breaks up the sometimes emotional interviews with those who remember how their loved ones or comrades died and the day and way they found out about their death.

The passage of time works to the film’s favor, as a lot of this history and personal experience, while hardly unique, feels fresher without having 40 other documentaries very much like it coming out every year.

So even though “My Father’s Vietnam” isn’t that much different from anybody else’s father’s Vietnam, it reminds us, without the dispassionate remove of historians and generals, of what that time was like for those who lived through it, and those who didn’t.