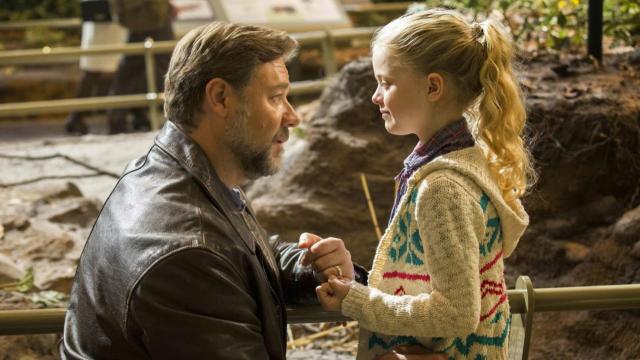 The pedigree for “Fathers and Daughters” suggests there were great expectations for this melodrama at one time.

The director, Gabriele Muccino, helmed two blatant grasps at Oscar nominations for Will Smith, “Seven Pounds” and “Pursuit of Happyness.”

It has Crowe, who has never recovered the fans he lost eleven years ago when he infamously tossed a phone at a hotel clerk, playing a novelist and doting daddy who is losing his mind, a sad, sick man who may lose his daughter to evil in-laws in the process. That’s what’s called “softening the image.”

It has Seyfried as that daughter, all grown up and dealing with intimacy issues by bedding and abandoning every man she fancies. What might happen if she finds Real Love (Paul)? She’s also a psychotherapist in training, trying to help a speechless child (Wallis, of “Beasts of the Southern Wild”) overcome her own “trust” issues.

And for good measure, there’s Diane Kruger as the brittle, drunken sister-in-law who can never forgive Jacob for being at the wheel in the accident that killed his wife, her sister and Katy’s mom. Bruce Greenwood plays her hatefully rich, heavy-handed husband, determined to wrench young Katy (the adorable Kylie Rogers) from her daddy.

But the sum of “Fathers and Daughters” is so much less than each of its individual parts. A misshapen attempt at maudlin (not unlike Muccino’s other Hollywood films), it enrages, here and there, but rarely touches or moves us.

Crowe is at his most sympathetic, a man having seizures, committing himself to a mental hospital in the film’s 1989 opening. He fetches six year old Katy from the in-laws upon getting out, but they’re all over him, determined to adopt her out of his life. He needs money. He needs a hit book. And he’s losing his mind.

Cut to the present, 27 years later, where Katy is pursuing her psychology degree. No, that college math doesn’t really add up. Seyfried, whatever wildly uneven career she is pursuing these days, is quite sympathetic as a broken woman whose psychic injuries date from decades before.

“I don’t love,” she tells her own therapist. “There’s nothing in here.”

The “Why is she still in college at 32?” math is just one of the lapses in the movie’s logic. Katy is constantly defying orders to break through to the child she’s treating, with no consequences. Greenwood and Krueger’s characters are insufferable caricatures of the worst in human behavior.

And the novel that the “blocked” writer frantically types away at is apparently inspired by the simple banalities of his own father-daughter relationship. That’s a best-seller?

Muccino should have thinned this out, picked up the pace to give urgency to the novelist’s impending madness and literary quest, spent less money on peripheral characters so that he’d feel less guilt about trimming their scenes to quick sketches that make the plot work. Fewer sex scenes (We get the point.,), fewer over-the-top seizures (Ditto), fewer father-daughter idylls.

Without those trims, “Fathers and Daughters” — The banality of the title is telling. That, and it makes no sense in the story as edited and presented here. — amounts to a lot of dead space with the odd great moment, a lot of plot and characters and dead-end scenes that add nothing to a story we have been twenty minutes ahead of after the first half hour.