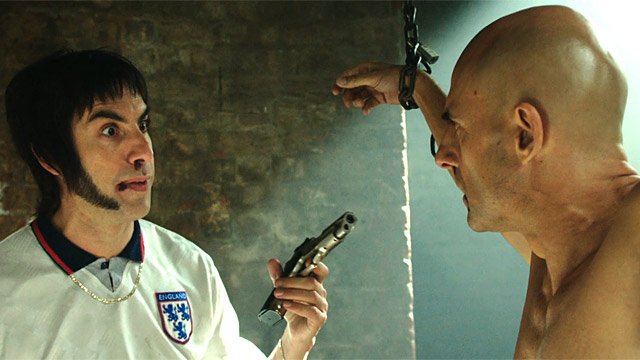 “The Brothers Grimsby” is 83 minutes of excruciating, nauseating, boundary-pushing “comedy” that never for a second feels like it’s anything but visual evidence of the end of Sacha Baron Cohen’s comic leading-man career.

And in a lame buddy picture, to boot.

But Leterrier (“The Transporter”) doesn’t do comedy. And aside from stopped-up toilet gags (“Brown Alert!”), elephant semen stunts and endless views of his butt crack, neither does Cohen.

Isla Fisher’s husband stars as a drunken, breeding working class lout and soccer fanatic in rundown Grimsby, a sideburned dope who sexes up his slovenly wife (Rebel Wilson, natch) in mattress stores. Because they’ve produced eleven kids, and privacy’s a matter of degree.

“You’re all out of breath,” he lectures his under-age brood. “I told you lot to quit smoking!”

“I thought you meant crack?” one tyke, perhaps the one named “Django Unchained,” complains.

Nobby misses his long-lost brother, Sebastian. That would be Strong, who used the decades after splitting from his fellow orphan to become an assassin.

The Selection Committee of screenwriters doesn’t bother to figure out a way for Nobby to discover his brother. The writers just hurl them together on an assignment, which Nobby botches.

And now both brothers are on the run, hunted by bad guys and the government agency (Ian McShane runs it, Mrs. Cohen, Isla Fisher, is Sebastian’s control agent), tracking a plot to South Africa.

Where “Push” star Gaborey Sidibe is subjected to the most humiliating scene of her career.

There’s an ugly running gag about Daniel Radcliffe and HIV, assorted gross masturbation/genital moments, involving humans and elephants  And then there are the almost-charming bits showing working class devotion to soccer.

But Cohen is way off his game, even when he delivers an amusing lecture on how guns remove guilt or accountability from violence.

The movie’s body count is almost as jarring as its sexual overreaches.

Toddlers tossing F-bombs, “I’m gettin’ stiffer than a pedophile at Legoland!” jokes and a son named “Luke. We call him that because ‘e’s got leukemia” (not really, just a welfare scam), and those are the highlights.

The rest? Exhausted, obvious and gross.