Movie Review: Lance Armstrong rises and falls, thanks to “The Program” 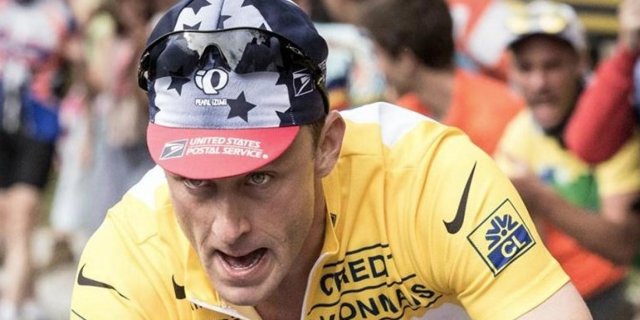 The rise and fall of cyclist Lance Armstrong earns a brisk and surprisingly nuanced treatment from director Stephen Frears in “The Program.”

The veteran Frears, of “The Queen”, “The Grifters,” “High Fidelity” and “Philomena,” finds the good and bad in Armstrong, the disgraced Tour de France winner who realized he’d need to cheat to keep pace with the best cheaters in his sport, and proceeded be the greatest cheat of them all.

Ben Foster (“The Messenger”, “3:10 to Yuma”) brings his usual intensity to the fiercely competitive Armstrong. He gets across the almost absurd competitive drive, the arrogance and menace (ESPECIALLY the menace) and the compassion, the athlete who started his LiveStrong Foundation and took his role as cancer survivor determined to inspire others seriously.

The script gives Foster moments where we see guilt sneak onto Armstrong’s face as he comforts this cancer sufferer or that one. He knows he’s let the world down long before we find out.

The most daring thing Frears does is let Armstrong be human, get past the arrogance that had him bullying anyone who dared to question him or his achievements (despicably, his shut-them-down defense was always “because CANCER”). We see the focus and mania the great athletes always possess.

“After the disease, I never want to be that close to losing again!”

The film is based on reporter David Walsh’s years of dogged reporting on cycling and Armstrong, and Irish actor Chris O’Dowd (“Bridesmaids”) brings a cynical whimsy to Walsh that has never come out in Walsh’s public appearances. He knows the sport, interviews Lance just as he’s getting his start racing in Europe and while noting “he’s not lacking in confidence,” sizes him up as only “a great (one) day racer.” He could never win the Tour.

But in one memorable scene, watching Lance sprint through the pack going UP a mountain (“He used his brakes, four times, going UPHILL!”) the slack-jawed Walsh knows.

Frears packs a lot into a 103 minute film. We get quick lessons in “power to weight ratios” and the body mass (shape) efficiency necessary to win at cycling. A lot of this stuff comes from another disgraced character in this saga, Dr. Michele Ferrari (Guillaume Canet of “Joyeux Noel“). The Ferrari scenes — in his office, in medical conferences — show how he realized that Erythropoietin, or EPO, a red-blood cell generating drug developed to treat anemia and kidney disease, could be a great boon to athletes.

The script and Canet’s way of playing these scenes make Ferrari come off as someone who knows he’s breaking the rules, but who honestly sees nothing unethical with making athlete’s bodies more efficient machines.

Frears can afford to paint this story in quick, illustrative scenes — broad strokes — because Armstrong’s story has been covered ad nauseum, through Oprah, TV movies and documentaries (Alex Gibney’s “The Armstrong Lie” is definitive) and “60 Minutes,” which credulously and breathlessly bought into his “miracle,” only to have revisit him after their gullibility was exposed. Brief scenes taking us through cancer and his rise to glory make the movie feel truncated, a “just the highights/lowlights” picture.

But “The Program” wisely hangs on Foster’s fierce performance, transforming himself into Lance. There’s joking among his awed (or cowed) U.S. Postal teammates about who will play Lance in a planned film about Armstrong — Matt Damon or Jake Gyllenhaal.

Foster reshaped his body (as did Lance) for racing and looks absolutely at home on a racing bike. Foster remakes his screen personality as Armstrong’s ego and swagger got the better of him, a cocky momma’s boy who took to intimidating riders, reporters and others who insinuated he was cheating, clenching his teeth and glaring/staring down those who questioned his “miracle.”

Lee Pace is properly amoral as Lance’s all-knowing manager, and Jesse Plemons makes a strong, guilt-ridden impression as teammate and “good soldier” Floyd Landis, whose downfall brought on Armstrong’s. Dustin Hoffman has a cameo as the risk assessment investor who put Armstrong on the record, lying about his cheating.

It’s not a Greek tragedy, and it’s certainly too soon portray Armstrong, a willing and cunning cheat, as that sort of figure. But Frears has done Armstrong’s sinful and inspirational side justice. And Foster has demonstrated once again why he’s one of the most formidable, under-appreciated talents in the cinema, giving a performance that transcends villainy and finds the ego behind the EPO, and the hero behind the yellow bracelets.