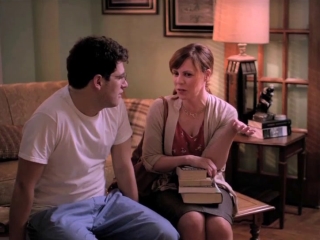 The cinema produces so few romantic comedies that work that it’s not just a shame, it’s a crime, when one gets out unnoticed.

“Slow Learners” is laugh-out-loud funny, at turns cruel and raunchy, playful and wistful.

It doesn’t star anyone famous enough to “open” a picture, so Sundance Selects picked it up for a song and released it to no acclaim last August.

But it’s on Netflix streaming, just in time for Valentine’s Day.

They’re best friends. They tell each other everything. Not that there’s much to tell. They’re among the legions of the lovelorn in trendy Media, Pennsylvania (outside Philly).

Jeff’s life highlight might be leading his single male friends’ book club. They’re mostly nerds like him.  But hunky/stubbly neighbor Max (Reid Scott of “Veep”) is their hero. He’s a player. Wallflower Anne pines for him.

She is wearing out her frank-about-post-childbirth bestie, Julia (Megan Reitman) with her self-absorbed tales of lovesick woe.

Yes, their friends can see Jeff and Annie as perfect together. But she doesn’t see him that way, and he’s resigned to going to Mom’s 65th birthday party (Marceline Hugot and Kevin Dunn play his parents) alone.

But the minute school’s out, Anne and Jeff decide to make a change. He loses the glasses, dons a bandanna and resolves to never sit through another computer date with anyone who lists his every physical, dietary, personality or fashion fault (the film’s first big laugh).

And Anne, who had to admit her surprising lack of intercourse to her gynecologist (also hilarious) lets her inner freak out — drinking, jumping up on bars, putting it out there in every sense of the phrase.

The predictable turns of events that follow turn Jeff into a womanizing jerk and Anne into a libidinous lush. All of which keep them, and us, from the inevitable.

There’s a cute/mean double date scene, misbehavior in a photo booth and tasty tidbits of school life where the kids he’s to advise avoid Jeff and the students who keep messing up her books and the Puritanical principal (Kate Flannery) drive Anne off the deep end.

Burns is a Kristen Wiig waiting to happen, and Pally — a sillier Michael Stuhlbarg look-alike, makes us suffer (amusingly) with him even as we’re laughing at him.

Not every scene works, but the laughs are nicely sprinkled throughout. And if you wonder how the film’s best riffs came off, watch the cannot-keep-a-straight-face outtakes during the closing credits.

Nobody saw it last summer. And Hollywood isn’t beating down the cast’s collectives doors. Yet. But these “Slow Learners” catch on just in time to be the best cheap date movie for Valentine’s Day.