Posted on November 25, 2015 by rogerinorlando 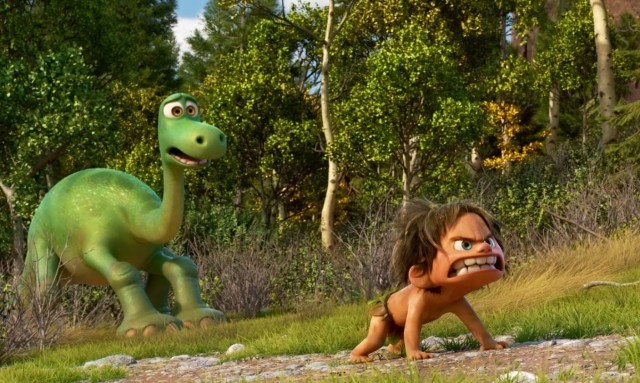 A father’s encouragement to his late-blooming son lies at the heart of Pixar’s “The Good Dinosaur.”

Arlo, we know, will have to prove that, to be brave to “make your mark.”

But along the way, he has to befriend — OK, adopt — a feral human boy, a growling bundle of teeth and moxie whom he names “Spot.” They have assorted random adventures, and in the end, some message about “family” is imparted. It is the Pixar way.

But “Dinosaur,”which boasts stunning, photo-realistic animation of water, trees, bugs and Pterodactyls, is a movie best described by that word — “random.”

It’s pretty, occasionally cute, but trippy — random. Yeah, there’s one credited screenwriter, but more than all but the worst Pixar product, it shows the signs of “written by committee.” Here’s a cute critter, here’s a cuter one, here are a couple that will make great fast food joint toy tie-ins.

Arlo was the runt of his litter, but Mom (Frances McDormand) and Dad love him anyway. Everybody else on the dinosaur family farm contributes. Arlo, not so much.

Then he gets lost. And the non-verbal human “critter” is his only help as he tries to make his way home.

When I say “Dinosaur” is “trippy,” I’m not just talking about the hallucinogenic scene where dinosaur — sort of a Saturday morning cartoon (cutesie, anatomically inaccurate)  version of a Brontosaurus — and human boy get into some fermented fruit and go a little loopy.

There’s their run-in with a cultist clan of Pterodactyls, led by Thunderclap (Voiced by Steve Zahn, who else?). They follow “The Storm,” because the “Storm giveth” and taketh away.

And then there’s the Texas-sized T-Rexes, in the middle of a “longhorn roundup.” Sam Elliott is their patriarch, and purt-much steals the picture, pardner.

There’s a touching moment or two, a maybe five laughs. And as I said, the best looking water and flora of any computer animated cartoon. It’s not “Monster University,” but it ain’t “Inside/Out” either. Not by a long shot.

“Good Dinosaur” is preceded by the very cute “Sanjay’s Super Team,” about an Indian boy who embraces the gods of his father’s religion, eschewing the caped superheroes of American TV.