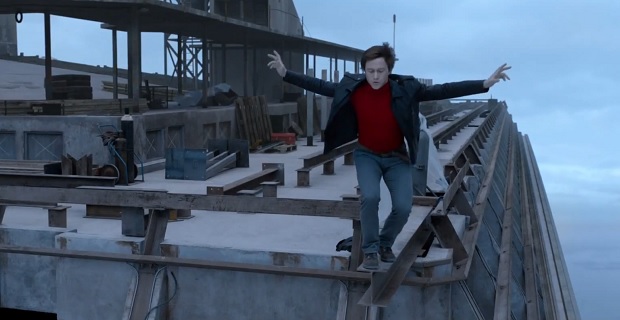 It doesn’t take too much away from “The Walk,” the frothy new caper dramedy about the World Trade Center high-wire walk of Philippe Petit, to say it’s inferior to the delightful 2008 documentary, “Man on Wire,” about the same event.

Robert “Forrest Gump” Zemeckis has concocted a flip, funny Hollywood version of that stunt, with Joseph Gordon-Levitt playing a Frenchman, Ben Kingsley as his tough-but-wise Czech mentor and state-of-the-art 3D and effects that recreate the WTC, the sense of staggering height and the zen thrill Petite got from his “coup.”

Where James Marsh’s documentary was poetic, tense and exultant, Zemeckis, who co-scripted “Walk,” is content with bemused, wry and sentimental. But he delivers some 3D thrillers. And every so often, he comes close to joyous.

Petite (Gordon-Levitt) narrates his own story, start to finish, playfully standing on the torch of the Statue of Liberty. “This is life,” he says of his high-wire walks. For him, walking between the Twin Towers of the then-new World Trade Center became a fiercely held dream, to stage “the most audacious work of art that has ever been done.”

The film shows us this dream taking hold in Paris, where the young Petit was a mime, juggler and street entertainer. He fell in love with wire-walking after seeing “Les Diables Blancs,” the “White Devils” aerialist act. Their patriarch, Papa Rudy (Kinglsey) grumpily tries to teach the kid (for a fee) safety, technique and showmanship.

You must “compliment” the audience, he purrs. Put a little grace, flair and gravitas in the act. “You cannot lie on stage. The audience will know what is inside you.”

The puckish Petit doesn’t lie. He tells everyone he meets he plans to walk between the Twin Towers, once they’re topped off in 1974. Among them, Annie (Charlotte Le Bon), the gorgeous street musician he meets and courts (via mime) in Paris.

Gordon-Levitt gets laughs with this audacity, as Petit assembles a “team” of amateurs to help him pull this off. There’s a clumsy photographer and a hanger-on who’s afraid of heights, an American “insider” and an electronics store “fixer” (James Badge Dale), along with a couple of quasi-stoners.

Petit boldly tells even the customs inspector on entering New York what he plans to do. Trespassing, dangerous, illegal as all get out? Meh. What does New York care? The city was already labeling the sterile, boxy WTC just “two filing cabinets” on their skyline.

But when the mop-topped Frenchman takes to the wire, Beethoven’s serene “Fur Elise” ripples through the silence of “an island floating in mid-air, on the edge of the void.”

Gordon-Levitt is long on charm, as always. He speaks French and slings a French accent as characters always find a reason to switch back to English, even in Paris.

Like “Everest,” “The Walk” is a film that justifies its use of 3D, and not just with cheap gimmicks. We sense “the void,” the scary nature of what was being attempted, and we’re  jolted by wires and props falling off the screen and into our laps.

But Zemeckis, who never makes “deep” films, shows his glib side time and again, including that use of the over-familiar “Fur Elise.” The movie is melodramatic and cocksure, flippant but often funny.

And the sentimental stuff about hated buildings that became something else in New Yorkers’ eyes with this stunt has a nice melancholy tone.

We don’t have the World Trade Center anymore, “The Walk” reminds us. They came from a more innocent time, when a foreigner could sneak into the country for mischief and mean us no harm.

Yes, “Man on Wire” gets at all those big themes and did it better. Netflix that extraordinary documentary, if you can’t seen it.

But give Hollywood its due, too. “The Walk” is the movie that takes us up there, gives us the jitters and makes us titter along the way.