Posted on February 25, 2016 by rogerinorlando 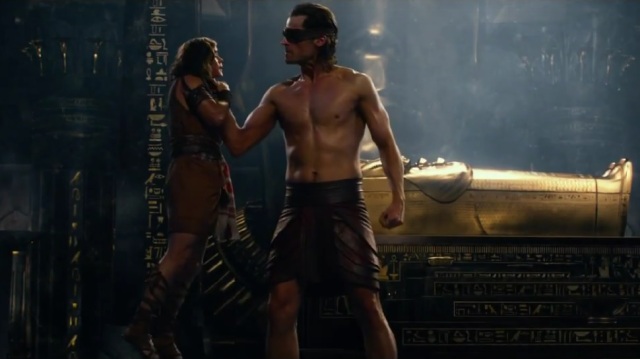 Swords and sorcery, sandals and sand — the genre nickname has changed over the decades, but the goofiness has not.

There’s a long year ahead of us, but “Gods of Egypt” is going to stand out as one of the sillier, more puzzling big budget, special-effects driven period pieces to come out.

There are no comic book heroes involved, no real history and little that’s actually Egyptian about the film. Not that there’s demand for pyramids and Sphinxes on the screen. Who thought this was a good idea?

And Nikolaj Coster-Waldau (“Game of Thrones”) is the hedonistic Horus, God of the Air and prince about to receive the crown of his father, Osiris.

But Osiris has promised his mortal subjects that “the Afterlife is for all.” No more Death Tax to enter heaven. And that’s the excuse Set uses to kill him, blind Horus, steal the prince’s magical eyes and his girlfriend, Goddess of Love, Hathor (Elodie Yong) and take over all of this Flat Earth.

But a young mortal thief (Brenton Thwaites of “Maleficent”) interferes. Anything to impress his lady love (Courtney Eaton). Only his thieving intervention, and perhaps a little help from the God of Gods, Ra (Geoffrey Rush) can prevent chaos.

Forced perspective and simple camera trickery render the gods gigantic when parked next to mortals. Digital effects render gold plated pyramids, golden flying sleighs and vast palaces, a Sphinx of sand and turn the gods into armored, winged Transformers when they get into a fight.

But a pyramid of shifting sand that could have been designed by M.C. Escher is clever, and there’s a comic touch that renders many moments endurable. That’s a help, because at over two hours, “endurable” is a nice break.

“Can you imagine anything more dull than sitting on a throne all day?” Hathor gripes. Yes. I can.

I won’t admit to having a soft spot for stories set in the Early Ages of the Push-Up Bra, but there are…perquisites.

Giant worms, giant snakes ridden by murderous vixens, Minotaur-soldiers, Ancient Egypt had them all. Ra has the coolest ride, a vast space barge from which he battles the demon that tries to devour his Earth (Flat, remember) every night.

I’d expect a #egyptsowhite protest movement over this, with a too-tanned Butler in the lead role, Coster-Waldau, Thwaites and Rufus Sewell and Oscar winner Rush in support. That’s the way these movies have traditionally been cast — whitewashed, with British Empire accents — and the studio has already started apologizing.

But here’s who stands out. Chadwick Boseman, who has played Jackie Robinson and James Brown, is the droll and brilliant god of Knowledge, Thoth, and wittily steals the picture. The half-Cambodian Yung and Yaya Deng have chewy supporting parts, and the vast crowds of extras –soldiers and civilians – are closer to the colors of North Africa and ancient Egypt than I was expecting.

And that’s what you’ll remember from this gold-plated goof of a movie. It’s only been hours since I’ve seen it and I’ve already forgotten pretty much all of it.

MPAA Rating:PG-13 for fantasy violence and action, and some sexuality