Posted on January 14, 2016 by rogerinorlando 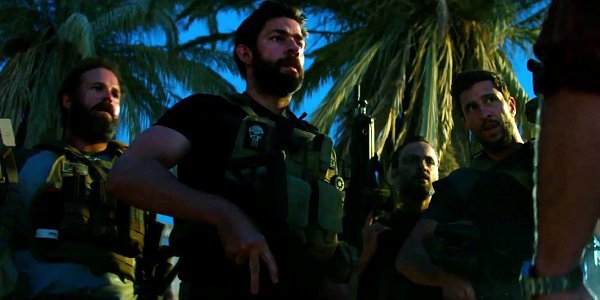 Action auteur Michael Bay handles the Battle of Benghazi like the political hot potato it is, turning this tale of the attacks on US facilities there and the death of a U.S. ambassador into a reasonably balanced, action-packed and fact-based account.

In other words, Fox News and the Hillary Haters are going to feel let down by “13 Hours: The Secret Soldiers of Benghazi.”

It’s not literally “a true story,” as an opening title assures us. There are claims made here that multiple GOP ordered Congressional hearings on the subject shot down — “stand down” orders from civilians to military folk, among them.

But what Bay (“Transformers”) delivers is a newfangled old-fashioned combat movie, “Zero Dark Corny,” with harrowing firefights given state-of-the-special-effects-art detail,  swaggering combat vets who wisecrack and drop one-liners — “How’re all the Jason Bournes doing downstairs?” — and lay on the slang and the acronyms, and get weepy and sentimental when flag or comrades in arms suffer.

Self-glorifying and self-aggrandizing, it’s a movie that answers the question one of its bloodied “contractor” (mercenary) heroes asks near the end, noting how CIA officials and others will be honored for their surviving this nightmarish night.

You get a book deal and lots of TV appearances, like all ex-soldiers involved in a harrowing piece of Dark Ops history do these days. It seems.

John “The Office” Krasinski bulked and buffed up to play Jack Silva, a family man hit hard by the financial crisis, an ex SEAL on his way back to another tour as a contractor — this time helping protect CIA agents at a “secret base” in Benghazi where agents were tracking and buying up the Russian hardware Gaddafi had bought for Libya. An opening montage shows us a rough timeline — recreating the moment when the murderous dictator was dragged out of a drainage pipe and killed by his own people.

Libya has fallen into near anarchy. And a handful of bearded ex-Rangers, SEALs, and others, led by Tyrone “Rone” Woods (James Badge Dale) make up the QRF (Quick Response Force) designed to do the driving and guarding of the agents as they make their deals.

An opening gun-to-gun confrontation with one of the factions they’re dealing with is real Cowboys and Indians stuff — all bravado and bluff and quick-draws.

The CIA boss on the ground (David Costabile, also from “The Office”) isn’t impressed by these weight-lifting, Joseph Campbell-reading (Hah!) “Alphas,” and the contempt from the Alpha Males towards him is mutual.

Then the U.S. Ambassador shows up, shows the flag and makes an effort to bind the new regime to the country that helped it get rid of the dictator. Under-protected, by his own design, he has bought into the CIA’s assessment that “There is no real threat here.”

The Sept. 11, 2012 attacks come, and the contractors chomp at the bit to get into action, but the CIA holds them back. So they say now. The Pentagon is slow, or reluctant, to send even a show of force by air. Confusion about who is attacking and why (riots about an anti-Islamic documentary about Muhammad were thought to be the source) reigns back home.

Bay and his screenwriter make this material murky, leaving out details, editing everything into a blur, as if fearing its controversy. They still can’t escape charges of “historical revisionism.”

Bay is most at home giving us a vivid, realistic setting (shot in Malta and Morocco) and a nerve-wracking, lawless environment where everyone was armed to the teeth and on edge.

The firefights are fierce and the contractors professional and video-game proficient at mowing down the waves of “Tangos” (terrorists) attacking their “modern day Alamo.”

While the various members of the QRF ( and others protecting the “temporary” embassy) are distinct, the action reduces all but Krasinski to a background blur of bullets, RPGs, exploding plaster and blood. Dale (“World War Z,” “Iron Man 3”) bites off big hunks of machismo and spits’em out.

The movies “13 Hours” resembles don’t do it any favors. It plays like “The Green Berets” or “Hamburger Hill,” or any of the wave of Reagan Era “This time we WIN” Vietnam pictures. All-wise (and Joseph Campbell-quoting) military men try to set the civilians straight, and failing that, blame them for a chaotic situation beyond everyone’s control.

But Bay pulls back from making this the political screed many were expecting. As a brutal and gory combat picture with historical underpinnings, these “Secret Soldiers” acquit themselves heroically. The action is visceral and intense.

Only the presence of the odd well-established falsehood undercuts this re-interpretation of what we think of when we think “contractors” (Think French Foreign Legion).

And that’s a shame.