Movie Review: “Joy” is anything but 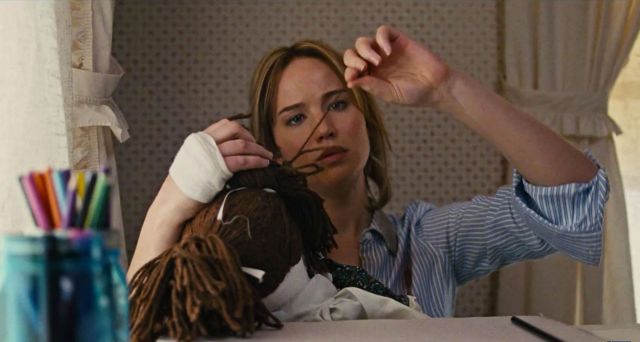 All winning streaks must end, and you can’t say Jennifer Lawrence and David O. Russell (and Bradley Cooper) haven’t had a good run.

“Joy,” their third collaboration, is no “American Hustle” or “Silver Linings Playbook.” This is the Russell of “I Heart Huckabees” or “Nailed/Accidental Love.” Whatever he was going for here — a satire of the American “up by your bootstraps” myth, a twisted take on “build a better mousetrap” capitalism — he misses.

And it’s not a “Flirting With Disaster” miss, either. If not quite a disaster, “Joy” threatens, time and again, to take away your will to live.

Lawrence is charming and empathetic as Joy Mangano, a single mom whose entire disastrous family has come to depend on her, even if they no longer have the right. It’s the early ’70s when we meet her. Mom (Virginia Madsen, always good) has confined herself to her bedroom, locked in to her soap operas.

Long-divorced mechanic Dad (Robert DeNiro) is returned to the house by his latest wife. “He’s broken,” is all she’ll say.

Joy already has her own ex husband (Edgar Ramirez) living under her roof. He wants to be a singer, can’t support himself and soon is sharing a basement with her dad. The bills are piling up, but Joy doesn’t let the desperation show.

Only Grandma (Diane Ladd, radiant  in a bit part) has faith. She’s the one who sees great things in Joy. Joy could be “Joy the doer,” the one who lives up to that potential she glistened with in high school.

But Grandma only makes Joy mourn for the better life she should have had.  The tipping point comes when Joy makes her one grab for the Big Brass Ring. She has that one Big Idea. And there’s this new start-up, a TV network that does nothing but sell stuff, run by a sympathetic hunk (Bradley Cooper) with a mesmerizing, messianic spiel. Will she make it? Will he help, or merely be another weight, ransoming her joy?

This is a real woman’s life story, and all Russell can do to make it cinematic is to pile up the obstacles — the Dad, resentful sister (Elisabeth Rohm), Dad’s imperious and wealthy new lady-love (Isabella Rossellini) — who all doubt her– the business folk who cheat her. Because, it is implied, she is “just a woman.”

Lawrence does what she can with the material. But Joy is basically the Biblical Job, built to suffer. Even triumph won’t bring happiness, and at least failure has the advantage of familiarity.

So we may root for her. Just not that much. We may wish for this or that good thing to happen, but in business, family, ex-family and family friends will let you down.

And pairing her up with Cooper again is just a cruel tease. The last third of the film not only is about the infomercial business, it’s like an infomercial itself.

Russell sets out to frustrate, and he does. And “Joy” never rises above that, an aggravating, un-fulfilling and empty night at the cinema with great actors trapped in an overdue flop from people we were just starting to figure were flop-proof.