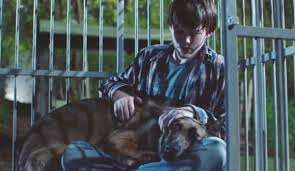 “Semper fidelis,” the Romans used to purr into their dogs’ ears, long before the Marine Corps adopted the Latin for “Always faithful” as their motto.
Most faithful of all? Marine Corps war dogs. That’s the message of “Max,” a pleasant if somewhat clunky and melodramatic crowd pleaser about one such dog who comes to live with the family of the soldier who died serving with him in Afghanistan.
One day, Max, a Belgian Malinois is serving with his handler, Kyle (Robbie Amell) in Kandahar, sniffing out arms caches in villages controlled by the Taliban. An ambush leaves Kyle dead, with Max refusing to leave his side.
Kyle’s family, played by Lauren Graham, Thomas Haden Church and Josh Wiggins, are still in shock over the awful news, when Max is brought to Kyle’s funeral. I don’t know if this really happens, but you’d have to be an ISIS sympathizer not to be tear up at this moving final reunion.
Trouble is, Max is in shock, inconsolable and too erratic to return to duty. He’s lost his sense of purpose. The Wincott family — one-legged Corps vet Dad, mourning mom and rebellious teen Justin — take him in.
“He’s your dog now,” Dad (Haden Church) growls. Justin (Wiggins) has to put down the video games and try to calm a distraught animal that howls in the night, shakes in fear at fireworks and only will bond with the boy who smells like his beloved Kyle.
Kyle gets little help from his pal sassy pal Chuy (Dejon LaQuake), a lot more from Chuy’s even sassier cousin, Carmen (Mia Xitlali). Their family’s part of a long line of chihuahua hoarders.
Director and co-writer Boaz Yakin, whose best credit was “Remember the Titans,” shoves weighty subplots about Justin getting mixed up with crooks, thanks to his talent for burning copies of unreleased new video games, and the nefarious activities of one of Kyle’s comrades from the Corps. That gives Max a chance to battle the bad guys’ dogs and perform almost supernatural feats of tracking.
All the eye-rolling melodramatics may be crowd-pleasing, but it clutters up the film. The script, co-written by combat vet turned hack screenwriter Sheldon Lettich (“Lionheart,””Legionaire,””Rambo III”), shoehorns in ideas like Justin’s dad’s intolerance and how “war hero” is sometimes an over-statement. The film wraps itself in the flag like a lazy country music song.
But the heart of Max is a boy learning about an always faithful dog, and as sentimental and manipulative as their bonding moments are, that’s what works.