Posted on June 4, 2015 by rogerinorlando 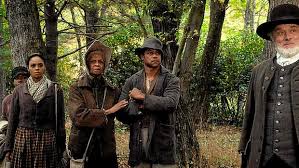 “Freedom” is nothing if not ambitious. An indie period piece about the Underground Railroad and the English slave ship captain whose change of heart led him to compose “Amazing Grace,” it covers enough ground to fuel a TV miniseries.
And it’s so musical it would have been better-titled “Song of Freedom.”
But while over-reaching is no great sin, “Freedom” doesn’t have the budget, the running time or script to do justice to either of its interwoven tales.
Samuel (Cuba Gooding Jr.) and Vanessa (Sharon Leal) lead their family in flight from a Virginia plantation in 1856.
David Rasche is Jefferson Monroe (Hah!), the rabid plantation owner who wants them back, figuring that he “took the idea of Christian charity too far” with his leniency.
William Sadler plays Plimpton, the veteran runaway slave hunter.
“I’m retired.” He is having misgivings about the work.
“Don’t let your conscience get in the way of business!”
So as Samuel and Vanessa are aided, stage by stage, by assorted Abolitionists — Quakers and other church folk — into the north, Plimpton tries to keep his assistants from violence as he reconciles his profession with his morals.
Samuel mistrusts the various white people who help the runaways, and rejects the churches enlisted in their cause. It’s up to the grandmotherly Adira (Phyllis Bash) to tell him, and us, of the slave ship and the Captain Newton (Bernhard Forcher) who was so appalled by what he’d done that he wrote one of the greatest Christian hymns, an appeal for forgiveness titled “Amazing Grace.”
It’s a heavy-handed movie that feels rushed and yet lumbering at the same time. An entire film (“Amazing Grace”) was built around the events that led to the composition of the hymn and the movement (first in Britain) it inspired. The Underground Railroad, given a spare treatment here, is also worth its own film.
Packing both tales into one movie, and pausing for a song here and there, robs the story of its urgency and pathos.
“Freedom” aims high, and attracted some good, underused talent (Broadway regulars Phillip Boykin and Terrence Mann show up). And it feels, start to finish, like a worthy cause. But cause and ambition aside, the movie they got out of this is a letdown.