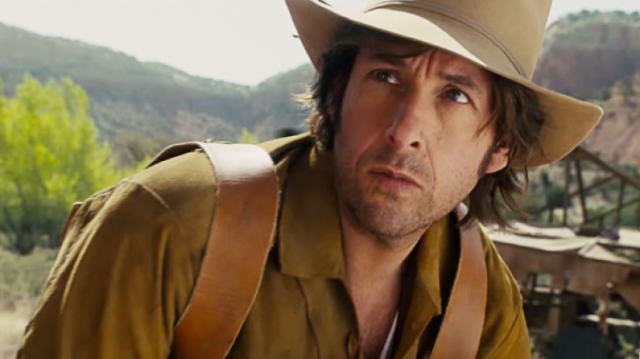 The moronic comedies of Adam Sandler have long been a cultural punch line. The ridicule has been steady and merciless, with only the odd Sandler hangers-on (“The Dan Patrick Show”) refusing to acknowledge the obvious.

The guy is comically/dramatically as limited as any “star” the movies have created.  He jokingly calls himself a moron, which doesn’t defuse the obvious — that his movies are moronic, funny only to the chemically altered or challenged.

Critics pound him like a nail stuck in concrete — repeatedly, with growing frustration.

But one of the little mercies of recent years has been that his audience of the undiscriminating has aged out of the movie-going habit. That’s consigned them, and now him, to Netflix, where his dreadful half-an-idea comic concoctions directed by and packed with cronies (Spade, Quinn, Nick Swardson, Rob Schneider for a while, Dan Patrick, et al) might have a more natural home. His fans aren’t going out any more. Not to the movies, anyway.

Now Netflix has now explained its corporate desire to keep Sandman’s career going past the point where Hollywood saw no need. They’ve streamed or rented 500 million showings of his movies since 2015, they said in a release which The Verge sees as a sign of the apocalypse, or at least evidence of Sandler’s enduring, appalling appeal.

They’re not all watching “Spanglish” or “Funny People” or “Punch Drunk Love,” I’ll wager. Nope. “Little Nicky” and “Grown-Ups” and “Blended” and “Jack and Ill” (his worst ever), “Happy Gilmore” and “Billy Madison” and “The Waterboy” probably dominate that data.

Anyway, after “Ridiculous Six” I found the need to watch Sandler’s ongoing slack of effort (ahem) pointless. The roundly, soundly pounded faux Tarantino “Western” (actually, more on the money than QT cultists would like to believe) was it for me. It’s not like reviews have ever kept anybody away from Sandler & Co., anyway. “Sandy Wexler” is his latest. No doubt the mouth-breathers have tracked it down and streamed it to death.

But this data from Netflix does give one pause.  People are staying home, watching the Sandman, refusing to outgrow him the way his characters refuse to grow up. He should run for office.