Movie Review: Man hunts down myth in “The Lost City of Z”

Major Percy Fawcett was a peripheral figure among that last gasp of stiff-upper-lip British explorers, a tragic figure who set out to find something exciting in one of the last great blank spots on the map — Amazonia.

He disappeared making one last trek into the jungle to find proof of a forgotten civilization in a place the old men of the Royal Geographic Society had permanently labeled “a green desert.”

But one of the truths to emerge from “The Lost City of Z,” David Grann’s book about Fawcett’s search, is that this hunt wasn’t about discovery as much as it was about proving one’s self worth. A throwback figure like Fawcett was a Victorian in an Edwardian age, a man with a stain on his family’s honor who sought, by a years-long pursuit involving bravery, suffering and audacity, to reclaim for his descendants their place in Britain’s rigid hierarchy.

Charlie Hunnam (“Crimson Peak,” “Pacific Rim”) is Fawcett, an Army officer we meet on a stag hunt in 1903. His competitiveness gains notice among all the right people.

But “He’s been rather unfortunate in his choice of ancestors,” one of the most withering self-admissions ever to come out of the “Downton Abbey” generation.

Fawcett is keenly aware of this fact himself, even if he isn’t as touchy about his sissy first name. He’d like his regal wife (Sienna Miller) and their growing brood of children to grow up without that cloud (his father’s ill-repute) hanging over them. And when the Army drops a dangerous job on his lap, the Royal Geographical Society swells aren’t shy about dangling “save your family name” in front of him.

He is to map the rubber-plantation destined border between Bolivia and Brazil as an objective third party, saving South America from another brushfire war between neighbors.

Joining him is a dissolute aide de camp, Henry Costin (Robert Pattinson). They inelegantly meet, which infuriates Fawcett, who has staked his “reputation as a man” on this quest.

But once in the jungle, the two come to rely on one another as they pass each square of the Jungle Movie Jeopardy board game. Treacherous rubber barons, a mission that the government has second thoughts about, suspicious natives, “primitive” tribal ambushes, an unyielding river and unrelenting rain play into it all.

It is while dodging snakes, starvation and jaguars that Fawcett sees signs of pottery that suggest to him “cities,” walls of skulls and carvings that might be hallucinations, or might be proof of what he comes to call “The Lost City of Zed.” He is English, after all.

His quest to find that city consumes decades, traveling back and forth to Britain just long enough to re-impregnate his wife, raise interest in return trips and fight in the Great War.

Director James Gray (“The Immigrant,” “Two Lovers”) stripped away the archaeology of the book and zeroes in on class and the romance of this quest for name-defining fame, which consumed Fawcett and drew in his eldest son, and upon the mystery, for which Gray presents something of a solution.

The script highlights the usual proto-environmentalist/socially ahead of his time touches to Fawcett, who contends with vestiges of slavery, British racism about “primitives” on another “Dark Continent,” cultural and rain forest destruction and a class war that he is hellbent on winning.

Angus Macfadyen is the face of this last fight, and makes a properly game amateur explorer whose name and money give him access to exploits his constitution is ill-suited for.

The direction is confident and thoughtful, but not brisk. There’s little epic about the look of this “Fitzcarraldo” for our times, either. A more immersive, rainy picture was called for, and a little of the archaeology (a civilization made of wood will leave little behind) would have helped.

Brad Pitt eyed this project when the book came out, and he has a producer credit on a picture the accomplished, sturdy but somewhat less charismatic Hunnam must hold together. It’s easy to see why Pitt wanted to do it, and why he passed on it.

Miller has done her best work over the past five years, and she gives more to the plucky, stuck-at-home wife, than the role gives back.

The real revelation here is Pattinson, donning a bushy beard to play a crusty second banana, at long last liberated from the demands of a “Twilight” matinee idol. He growls and swallows his lines, wears loyalty in his eyes (Costin follows Fawcett into WWI) and gets across military competence in way you’d never have guessed when his face was covered in vampire glitter.

Tom Holland, the new Spider-Man, is a bit young to play Fawcett’s oldest son, Jack, as an adult who insists on getting to know his dad by sharing his quest for exploration vindication and family fame. 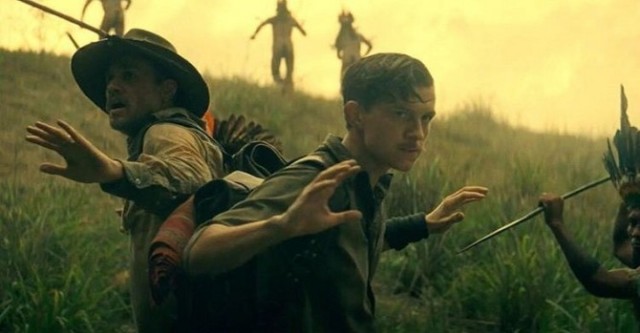 “Lost City” aims for a sort of new-fashioned old-fashioned approach to this subject, and that unfortunately makes it more Earthbound than soaring, more pedestrian than epic.

But Hunnam, Miller and Pattinson and the estates of Ireland and jungles of Colombia make fine impressions in a story that is less about making history and more about passing a horrific test you give yourself in order to prove you’re better than “they” will ever give you credit for.

Credits: Written and directed by James Gray, based on the David Grann book. A Bleecker St./Amazon Studios release.