Movie Review: Noomi races to escape her own “Rupture” 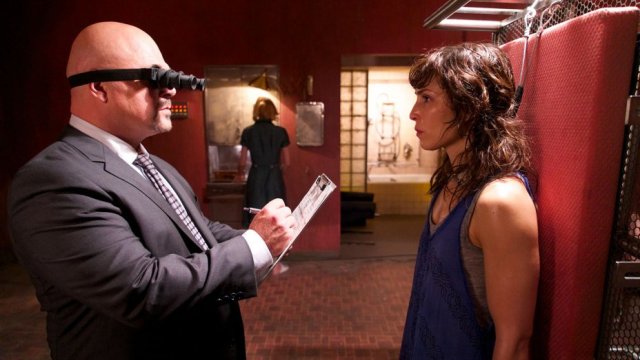 Noomi Rapace is an old hand at making us fear for her, root for her to escape dire circumstances and keep the faith that whoever she’s playing, the woman is intrepid and not to be under-estimated.

Renee (Rapace) is just a single Kansas City mom with a temperamental tweenage son and a jerk of an ex husband. But “they” are watching her. They have hidden cameras all over her house. And one day, one of them (Michael Chiklis) sets her up for a tire blowout on the way to sky-diving.

An efficient yet not quite professional-looking team kidnaps her and drives her to an abandoned factory — somewhere. Others are there. She can hear their screams.

Enraged and terrified, “What do you WANT from me?” is what she yells when the alarming (How can she breathe?) plastic tape gag is peeled off. They covered her mouth and nose, lashed her to a bench in a delivery truch, but left her eyes free. They want her to see what she’s going to get.

“Are you the government? CDC? Do I have a virus?”

It’s a rhetorical question. They, and we, have seen her freak out over a spider in her house. So that’s to be it. This woman, who bragged to her child “I’m capable of ANYthing” as she headed skydiving, is being tested. And the test will involve spiders.

The script, by two guys who gave us “Fur: An Imaginary Portrait of Diane Arbus” and “Secretary” and most tellingly, “Hard Candy,” between them, has a lot of first-time screenwriter clumsiness.

Never has foreshadowing in a film felt more obvious than when Renee stuffs an Exacto knife in her pocket.  Rarely is an elaborate three “clank” door lock given so much screen time, visually and aurally. Never has a big, roomy ventilation shaft felt more like a plot device. 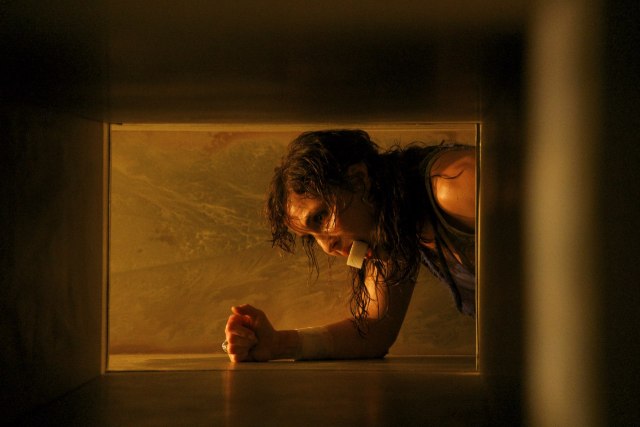 Rapace makes Renee’s escape attempt as harrowing as you might expect. Her slight size builds “She’ll never it” into every role that puts her in harm’s way. The presence of veteran bad guy Peter Stormare (“Fargo,” “The Big Lebowski”) makes us fear the worst.

But the genre ID “sci-fi” unravels much of the suspense of “Rupture.” Her captors want to hasten her own “rupture,” and promise her release. “Why would they do that?” we wonder, distracted by this layer of the story. Are they alien brainwashers?

The middle acts are fraught with tension, the finale an utter cop out. Kind of makes you realize why we haven’t heard much from director/co-writer Steven Shainberg or co-writer Brian Nelson in years. They’ve outsmarted themselves, here.