Posted on October 21, 2016 by rogerinorlando 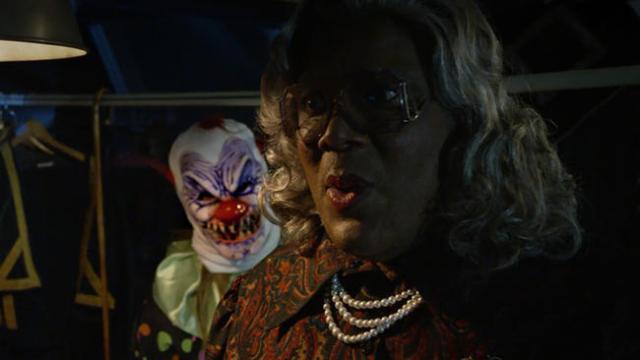 Oh Madea, how we’ve missed you.

No. Seriously. Unless you are into getting your fixes direct-to-video, Tyler Perry’s alter-ego has been MIA from movie screens for three years.

And “Boo! A Madea Halloween” (Haller-ween?) has TV commercials that make you long for the big-boned gal’s heydays. Maybe a Halloween movie, a Madea “Scary Movie” with all sorts of slapstick, effects and big scary sight gags could breathe a little life into dude in a dress.

“You know black people scared of everything,” as Madea herself declares.

But the same problems curse “Boo!” as the last half-dozen Madea movies. Perry tries to get by without effects, without sight gags. It’s a comedy of words — rants, profane tirades, riffs. And Perry is running short on those. Funny ones, anyway.

He writes long, windy spiels and wordy old folks roundtables ranting about “kids today” and “back when I was strippin'” and the joys of medical marijuana — “I got me a PRESCRIPTION!” He works in his homilies about raising kids, the N-word, corporal punishment and avoiding religion while invoking “Jesus” in any situation of stress. “Boo!” is a “spare the rod, spoil the teen” life lesson from He who has Raised No kids.

Perry strains to put Madea into a college comedy about randy teens trying to get in trouble at a frat party on Halloween night, a cumbersome plot device that adds 40 clumsy minutes to the running time, and zero laughs.

In short, there is no truth in advertising. The only laughs are in the trailer. And Madea and her Crew get them.

And thank God he does, because they only show up 12 minutes in, and proceed to regale us with scenes about pot, accounts of their various surgeries and “kids these days.” Madea dominates the talk, goosing the conversation forward with “Go the hell on” and “Show some apolegection!” and”Little love tap never hurt nobody.”

Scary clowns are dominating the trick or treating, though the odd kid dolled up as a cow shows up.

“Got that kid dressed like chocolate milk in a box. He needs to be trick-or-treating for a damn treadmill!”

Misbehaving teens sneak out, Madea gets manhandled trying to rescue them, then mad, then scared, then MADDER. And frat boy pranks are played.

The group scenes with the bug-eyed White and racially ambiguous Lovely are loud and riotous. And everything that ties them together is cut-rate and in need of editing/workshopping/rewrites. Perry’s lack of effort in writing the scenes he isn’t in has become more obvious with each Madea movie.

All those years with Madea not on the big screen haven’t changed Atlanta’s mogul’s business model. He’s still doing everything cut-rate, still not sharing credit or spending money on joke writers. Sad thing, because the big guy with the cross-dressing fetish is fresh out of jokes. Madea is damn near played out.

Wish it wasn’t so, as I still find the character brash and cranky fun. But until Perry parts with a nickel and brings in funny people to goose his ideas into something wittier, Madea isn’t MIA, she’s DOA.

MPAA Rating:PG-13 for drug use and references, suggestive content, language, some horror images and thematic material

Credits:Written and directed by Tyler Perry. A Lionsgate release.