Posted on December 23, 2015 by rogerinorlando 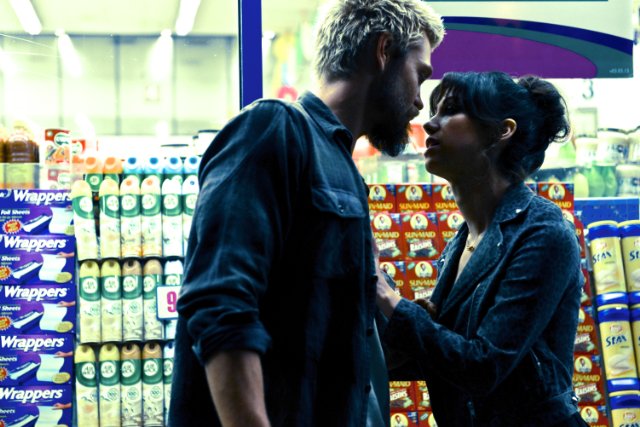 In Los Angeles, even the homeless are better looking than we could ever hope to be. With better hair and makeup, too.

So that’s a comfort. I guess.

“Other People’s Children” is an indie drama featuring a bunch of quite attractive young actors slumming.  Literally.

They bum money, buy and do drugs, cavort (a little pick-up basketball) and squat in what has to be the cleanest loft and “abandoned warehouse” in the history of homelessness.

Whatever high-minded intent of Liz Hinlein’s drama, it never for a minute feels authentic or anything but superficial. Nobody involved, from the screenwriter through the cast, dared to get her or his hand’s dirty.

Diane Marshall-Green is Sam, daughter of a famous painter (Scott Patterson), a suffering artist who barely humored his videographer-daughter’s effort to make a shallow documentary about his work.

What are your influences, she wants to know?

“My bank account,” he growls, slashing more paint across canvas in his best Jackson Pollack fit.

Dad has died, and Sam has been laying low, trying to cope.

But Sam meets this irritable homeless guy (Chad Michael Murray), a peer and a hunk, too, with perfect teeth, perfect abs. She wants to FILM him. And his tribe.

Murray (“To Write Love on Her Arms”) makes P.K. a philosophical junkie (“No NEEDLES,” he insists, underlining the movie’s refusal to gets it hands dirty).

“When you’re hellbent on self-destruction, there’s nothing anybody can do.”

Will Sam figure this out in 85 minutes? What do YOU think?

The supporting cast is colorful but entirely too put together — with the occasional exception — to be living on the streets.

Sam has an ex (Michael Mosley) who has taken up with an old friend (Alexsandra Breckenridge).  But the whole love triangle thing is a non-starter.

Marshall-Green is so alluring as Sam that men keep caressing her face, leading on some occasions to the removal of shirts and naked wrestling.

But movies that dabble in homelessness, even movies about cute filmmakers who want to film and flirt with the homeless, require more commitment than this. No number of scenes featuring a nubile nude can countermand that.