Posted on December 16, 2015 by rogerinorlando 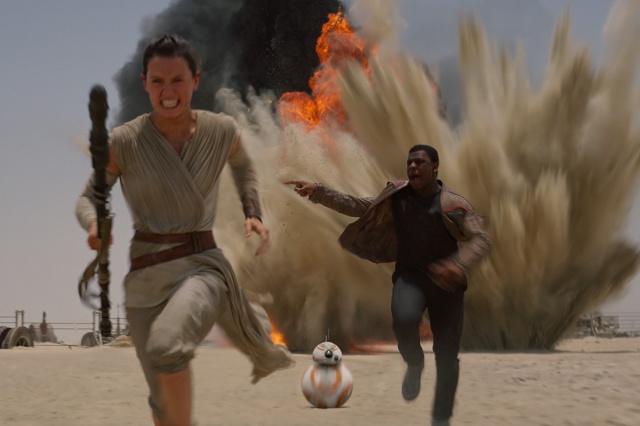 The universe has gotten a lot more diverse in the decades since we first visited “A galaxy far far away.” And less sexist.

There’s a Republic, and plenty of reminders — crashed warships, grizzled veterans — of the war that brought it back.

But evil has reared its ugly head. The First Order is less subtle than the evil Empire about its affection for fascist optics, fascist storm troopers and fascist practices — massacring civilians and what not. But perhaps there are people with souls underneath those scary white (and black) helmets.

So a Resistance has formed, led by The Usual Suspects. And the war among the stars begins again.

J.J. Abrams’ “Star Wars” reboot,  “The Force Awakens,” begins with smuggled plans. OK, it’s a map this time. There’s an adorable droid entrusted with the map. He gets away on a desert planet. Advice from a sage of the desert — warmly played by the great Max Von Sydow — is taken.

Escaping from the planet involves a dazzling dogfight and the Millennium Falcon. Old friends show up, and the map makes its way toward people who might be able to prevent this big round thing from blowing up planets.

Sure, it’s still a fun ride — shootouts, getaways made via hyperspace, wisecracks. But pretending “The Force Awakens” is anything more than a glib facsimile of “A New Hope,” the original “Star Wars” movie, is delusional. It’s dull because it is achingly unoriginal. Abrams,  at every turn, plays it safe, with multiple “takes me right out of the movie” lapses.

In Disney’s hands, it’s a small galaxy, after all — billions of people, with a choice few just stumbling into each other in the most bizarre coincidences, fewer quest story plots to choose from (the same one), desert planets that have the same sorts of critters, bars with the same barflies, etc.

The new villains are  Kylo Ren, a black-helmeted brute who throws hilarious tantrums, shorting out all manner of electronics with his Crusader broadsword light saber. Adam Driver is Hayden Christensen reborn, in essence, a somewhat amusing menace with the helmet on, that tall, skinny, curly-headed funnyman from “Girls” and “This is Where I Leave You” with the helmet off. Miscast.

His best line? “We’re not done here.” Kind of lacks…something.

And there’s a Supreme Being, another digital creation acted out by Andy “Gollum” Serkis. At least he’s kind of scary.

The desert planet heroine, Rey, is a scavenger of Jakku played with pluck by Daisy Ridley. She’s waiting for “my family. They’ll be back, someday.”

She is no damsel in distress.

The most interesting addition is the Storm Trooper with a heart. John Boyega shows the character’s humanity. Raised to blindly follow orders, the blood of his first combat makes him crack. Boyega lets us see the remorse, and maybe a little cowardice. He comes to be called “Finn,” because the First Order gave him no actual name.

The guy who names him that is crack Resistance pilot Poe, cartoonishly played by the normally reliable Oscar Isaac (“Ex Machina,””Inside Llewyn Davis”). Poe is captured and tortured, making feeble wisecracks all the while. He must sense that a Storm Trooper will turn traitor (for the first time EVER) and help him escape.

But the moment Han Solo shows up, this becomes a Harrison Ford movie. Han’s a single-again grumpy old man a little flattered that Rey quotes his legend (“the Kessell run”) back to him, still bickering with Chewbacca, still reluctant to get involved until the chips are down. Even if Leia (Carrie Fisher) is the one asking for his help.

Ford’s easy comfort with a cheesy line has never faltered, and Abrams leaves the picture in his able hands for the middle acts.

The effects are sharper, 40 years more developed. Why does Abrams do so little to show them off? The chases, dogfights and set-piece battles are static and recycled. The Big Pause for a Big Death is just an eye-roller.

Even the aliens are oh-so-familiar, right down to Admiral “It’s a trap!” Ackbar.

The earliest reviews of this are all glowing, as indeed they were for this past summer’s “Jurassic Park” clone — “Jurassic World.” This will certainly make billions. “Brand” above all, right?

But “The Force Awakens” boils down to a couple of genuine lump-in-the-throat moments, and those are due to nostalgia. The rest? Seen it, done it, been there, and remember it — even though it was “a long time ago.”

(UPDATE — Now EVERYBODY realizes “Force Awakens” is a “glib facsimile” of “A New Hope.”