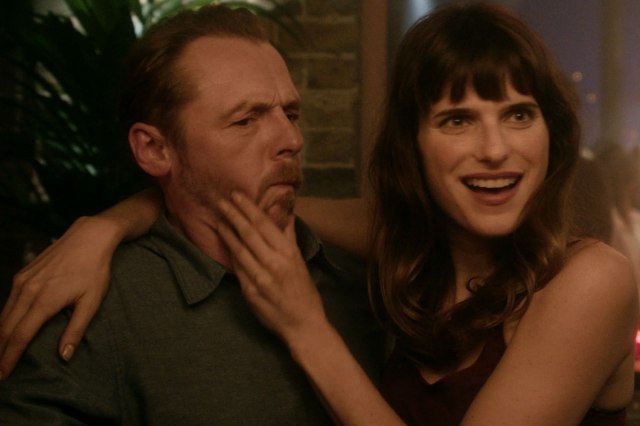 Sure, “Man Up” stars two of our favorite on-screen funny folk — Lake “In a World…” Bell and Simon “Shaun of the Dead” Pegg.

But Bell, playing a lovelorn Brit, takes a while to settle into the character and the accent. And Pegg? He takes forever to show up.

And once his character does arrive — she meets him under the clock at London’s Waterloo Station under false pretenses because he thinks she’s his blind date — there’s all this awkward setting up of the silliness to come.

Nancy (Bell) is pretending she’s this annoying 24 year-old triathlete and self-help book fan she met on the train, the true blind date for newly-divorced Jack (Pegg). He’s trying to impress her, prattling on so fast that she never has a chance to explain that she has the self-help dating book he’s supposed to recognize her with by mistake.

The date begins clumsily, the lies pile up. They stumble into some obsessed barkeep from her past,  Sean (Rory Kinnear, hilarious), a guy capable of blackmailing her into sexual favors just to keep her secret.

“It would appear that I have you OVER a barrel, at last!”

This comedy by the director of “The In-Betweeners Movie” and written by Tess Morris doesn’t truly spark to life until Sean shows up, at about the 35 minute mark. The bland predictability falls away, the banter lights up and the two leads set off real sparks

Why? Because they fight. They’ve “shared” all these likes/dislikes which the dating book (“Six Billion People & You”) ordained that they try. They’ve sized each other up. And in just an hour or so, they know where to stick the needle.

“The BITTER look really suits you.”

“Whoa, lemme guess, ‘I’m all wounded and rejected and I need comforting by a woman HALF MY AGE.'”

Screenwriter Morris sets this against the 40th anniversary party of Nancy’s parents, which is supposed to feature a speech by her, but which she’s skipping for this whim date.

The wistful and poignant stuff doesn’t play as well as the surprising setbacks to romance, many of them delivered by the weirdly randy Sean at the most opportune times.

Not entirely hilarious, largely owing to that empty opening, “Man Up” can be recommended for that promising midway mark fight to its flash mob finale, 40 or so minutes that will make you grin and remember why so many of us consider Pegg and Bell (lately on TV’s “Wet, Hot American Summer” farce) the most reliable names in any indie comedy’s credits.