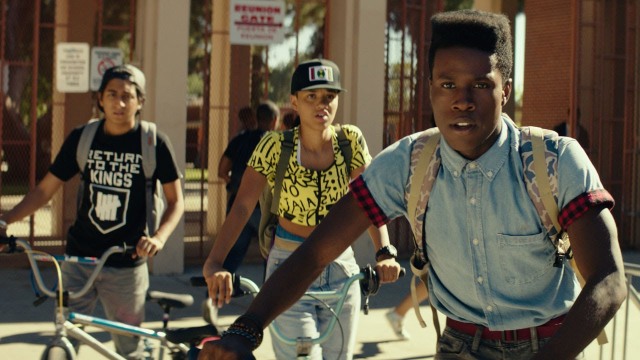 “Dope” is the most daring comedy of the summer, a funny film that hunts for laughs in the everyday menaces that face black teens growing up in the corner of Los Angeles named Inglewood, in the neighborhood its residents call “The Bottom.”
It begins by throwing the three most common definitions of “dope” at us — from drugs to idiocy to “That’s so dope,” the wish to convey the utmost approval. And then writer-director Rick Famuyiwa makes use of every one of those definitions in a tale of smart African American kids who are a little too “white” for their high school, and thus don’t fit in.
Malcolm (Shameik Moore),  Diggy (Kiersey Clemons) and Jib (Tony Revolori) are best friends — totally into skateboarding, rehearsing their punk band, ’90s hip hop nostalgia and prepping for the SATs. Nerds that they are, they dream of college.
Malcolm ignores his guidance counselor’s “Who do you think you are?” He dreams of Harvard, of not living down to expectations for a kid like him. He and his friends have “a daily navigation between bad…and WORSE…choices.” We’re not just talking bullying and who each can ask to the prom (Diggy is a girl, and a lesbian). A wrong step, even one they don’t realize they’re taking, could get them killed.
Such as when Malcolm stumbles into the charming/disarming drug dealer Dom (Rakim Mayers) who uses the kid to flirt with the fetching Nakia (Zoe Kravitz), all braided hair, sleepy eyes, piercings and tattoos.
That interaction gets the trio invited to a hip drug dealer’s party that ends in a hail of bullets and a police raid. Malcolm has a gun and bricks of drug-of-choice Molly (“Molly Ringwald,” MDMA) stuffed into his backpack. His choices go from worse to deadly. No, going to the cops isn’t an option.
The dopey opening sets us up for one kind of film, with ignoramuses complimenting Malcolm for his “photogenic memory” and mocking his Kid’n Play hair and “Fresh Prince” vibe. But the drugs and the violence introduce us to a harsher reality. Famuyiwa gets lost in this,with its dated Bitcoin-based hustle and mixed messages about black achievement, and the movie suffers for it.

The young cast is fresh and believable even though all the ingredients of teen male wish fulfillment fantasy are here. Nubile, naked women fall in the path of virginal Malcolm.  But bloodletting, drug abuse and online drug dealing tip this “Risky Business” into riskier territory, a “Friday” with gunplay.
Thus does film school grad Famuyiwa wander away from the hilarious dialogue — overdosed with friendly uses of the N-word — and goofy antics and into something more serious, with an overlong and Spike Lee preachy third act.
“Dope” has a hint of “Virginity Hit” and “Project X” about it, but it goes much further than those trangressive and sometimes violent romps. It challenges its characters, its community and us to think beyond cause-and-effect, stereotypes and expectations. It doesn’t always work, but when it does, Famuyiwa is onto something both funny and thought provoking.