Movie Review: “In the Heart of the Sea” 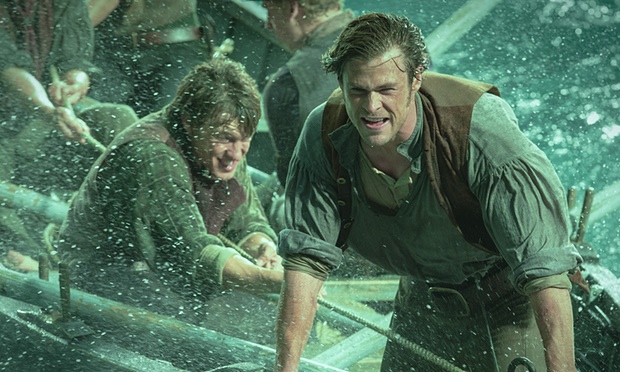 “In the Heart of the Sea” is a tale of whales and wooden ships and the flawed flesh-and-blood men who hunted them.

Nathaniel Philbrick’s best-seller about the true story that inspired “Moby Dick” becomes a solid, beautifully-detailed but conventional screen adventure in the hands of Ron Howard.

It’s about Nantucket capitalism, greed, and the whale ship Essex, sunk by a whale in the middle of the Pacific at the height of the whale oil boom.

The Charles Leavitt script makes that “inspired ‘Moby Dick'” element literal. It presents this yarn in flashback, as a tale remembered by an old salt, Tom (Brendan Gleeson).  The young writer Herman Melville (Ben Whishaw) is the one who sends Tom on that trip into memory, forcing him to recall the horrors of that one voyage.

The old whaler remembers that 1819 voyage, and the class struggle between an able and qualified first mate and the in-over-his-head captain born into Nantucket whaling royalty. And Melville smells his Great American novel in the making.

Chris Hemsworth, the cinema’s current ideal man’s man, is Owen Chase, a mate who was promised a command, but forced to serve under George Pollard (Benjamin Walker), son of a rich captain. Their every encounter is cutting, the “silver spoon” man of privilege dismissing the “landsman” whose family has not lived on Nantucket long enough to count.

Howard and the screenwriter set this “Mutiny on the Bounty” conflict on edge with a harrowing 3D squall. The brigantine Essex is tossed on her beam-ends, canvas flapping, every inch of hemp rope groaning, every wooden beam, plank and yardarm moaning and on the verge of snapping.

Howard takes us above and beneath the waves for a whale hunt, shows us the (digital) kill and the gruesome business of harvesting the blubber and oil. His arty touches include lots of extreme close-ups of men and metalworking, blocks and belaying pins, ratlines and rigging. 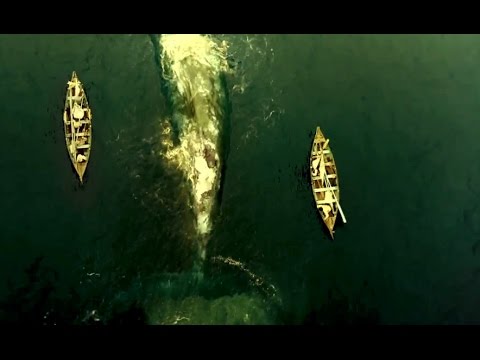 It was an unlucky voyage, with few whales and feuding commanding officers anxious to finish their deadly work and get home so they could never see each other again. In South America, they’re warned about a “white as alabaster” whale with a grudge. And they laugh.

Cillian Murphy makes a solid impression as a mate and friend of Chase’s. Young Tom Holland is an engaging younger version of Gleeson’s Tom Nickerson, a wide-eyed kid “learning the ropes,” as they say at sea.

Hemsworth is properly hunky and iconic. He looks studly in the stand-at-the-masthead shot (Russell Crowe in “Master & Commander”), and manfully does his best with the quasi-poetic dialogue.

“Look at him! Most fearsome creature ever to live on this Earth!”

Walker pretty much wilts in Hemsworth’s presence, which might be dramatically required but tends to deflate the sails, here.

The particulars of the “vengeful” whale are given plenty of Hollywood touches, the lost-at-sea/”custom of the sea” ordeal of the shipwrecked crew is more gruesome in the telling than the showing.

The digital storms and whales are beautifully rendered, and the 3D (broken lines whipping at you, harpoons and whales right in your face) tastefully used.

But what’s missing here is the overarching theme of Melville’s book, the sense that this story had more than just class conflict and that one account of a whale fighting back in common with “Moby Dick.”

John Huston’s famous 1950s version of “Moby Dick” was troubled and flawed, but a true epic poem that seems to grow in stature with the passing decades. If he’d had digital whales and storms, the “troubled” label that dogged that Gregory Peck/Richard Basehart/Orson Welles film would have been erased. He got at the Big Ideas and Big Themes.

Howard’s “In the Heart of the Sea” merely unravels the yarn that inspired the great book, a good-looking film that never sinks, but never really soars either.

1 Response to Movie Review: “In the Heart of the Sea”