Memoirs as they are practiced today are can feel like self-serving, self-pitying exercises in self-help. But watching “Being Flynn,” it’s hard to begrudge playwright/poet and memoirist Nick Flynn his musings, mostly about his homeless, alcoholic and delusional writer-father, Jonathan. The younger Flynn paid his dues and went through the ringer for this story, which he put on the page in 2004.

The film follows two narratives and two narrators. There’s Jonathan (DeNiro), an angry, bigoted old man with some of the trappings, a bit of the discipline and all of the bravado of a celebrated “artist.”  He tells one and all that there are three great American writers, and that he’s one of them. He’s never been published, never held a real job for any real length of time. But his ego buries that reality behind delusions of talent and the glory that will come when “my masterpiece, ‘The Button Man,'” is published.

“I shall soon win the Nobel Prize,” he crows about this unseen Great American Novel.

And then there’s Jonathan’s estranged 20something son, Nick (Paul Dano, as unaffected an actor as there is), a self-absorbed would-be writer adrift in a haze of booze, infidelity and guilt. He cheats on his girlfriend, doesn’t acknowledge his addictive personality and can’t seem to find his purpose. 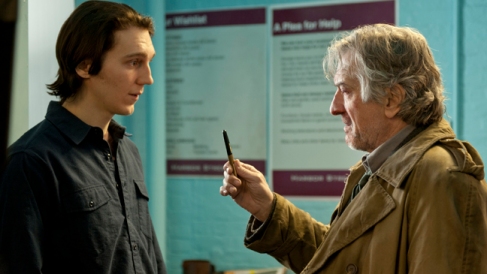 Until, after 18 years, Dad re-enters his life. Nick stumbles into a job at a homeless shelter, and through the men he meets there and the things he sees,  the petty degradations of their lives and his — bandaging, clothing and de-lousing them — he might find his voice and come to grips with this troubling relationship with the homeless man he long knew through the old man’s pretentious, insanely over-confident letters.

Dano is perfectly cast as a troubled guy hell-bent on not being his father’s keeper. It is up to the people who work with him in the Harbor St. Inn shelter to point out how the return of his father, to his life and to this very shelter, is ripping Nick up.

Weitz is back in his “About a Boy” comfort zone, and skillfully surrounds Nicholas with a rough but caring crowd who run the shelter (Wes Studi and Lily Taylor), and a sympathetic love-interest (Olivia Thirlby) who works there because she has issues of her own. Julianne Moore radiates a sort of exhausted pain in her flashback scenes playing Nick’s dead-mom.

Weitz, in adapting this book, pulls his punches at times, and seems intent on reaching for the obvious — Jonathan’s trite repetition of the mantra, “We’re put on this Earth to help other people.”

But “Being Flynn,” for all its light, hopeful tone in a world of despair, in unsparing in showcasing that despair.  And DeNiro, the very picture of the human wreck struggling every hour, with every prententious pronouncement, to deny his state, is a marvel — menacing and mean, a character just on the human side of caricature.

MPAA Rating:R for language throughout, some sexual content, drug use, and brief nudity

Credits: Written for the screen and directed by Paul Weitz, based on the Nick Flynn memoir. A Focus Features release.