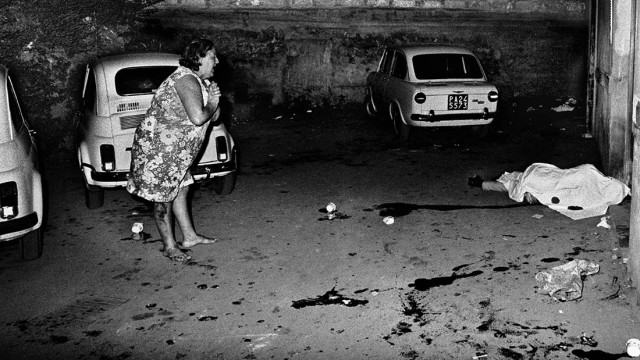 She didn’t take up a camera until she was 40, and became, she says, “the first woman (news) photographer in Italy.”

But it’s where Letizia Battaglia took up her art and trade and who she pointed her camera at that have made her famous.

“Shooting the Mafia” is about her decades-long quest to document the crimes of “La Cosa Nostra,” the Mafia, in her native Sicily in the blood-stained capital of Salerno.

When she started taking those photos, first for the local newspaper, L’ora del Popolo” (“The Hour of the People”) that she was “forced into another world,” Battaglia, now 84, says in the film. She’d capture crime scenes — first in black and white, later in color.

“Your first murder never leaves you,” she growls in between puffs of her omnipresent cigarette.

The stark poetry of black and white images of the aftermath of violence remind one of the work of New York street photographer Weegee.

But Battaglia would photograph the survivors, women shocked with grief at the loss of a husband, father or — too often — child.

“Photographing trauma is embarrassing,” she confesses (in Italian with English subtitles). You’re working, pointing your camera at suffering, getting close because changing lenses misses the moment. You’re intruding, assaulting the already traumatized.

She captures street scenes of tweenage boys, smoking and playing poker, affecting the tough guy guise in imitation of the local thugs. “The killer is a symbol for them.”

She attends funerals, where the killers or those who ordered the killings are sometimes mixed in with the mourners, where some of the grieving are plotting revenge.

And she goes to court when the real murderers, the Mafia bosses who order the killings, many of them in hiding for 20-40 years on an island where “no one sees anything.” This, more than anything else, has earned Battaglia death threats, reducing powerful, swaggering mafiosi to just another well-dressed hood, handcuffed to a couple of cops — humiliated.

Veteran documentarian Kim Longinotto incorporates footage from Italian and early American TV documentaries about the Mafia to flesh out the history and the criminal organization’s thorough corruption of Sicilian life.

She goes into Battaglia’s personal life as well, an unhappy early marriage that ended her education and thwarted her dreams, the many men that followed — most of them much younger than this strong, courageous icon of resistance to literal “mob rule.”

Battaglia got into politics, got her hopes up when crusading magistrate Giovanni Falcone went to war with the Mafia in the 80s, and was so devastated by his murder she could not photograph it.

Scores of police, and virtually every prosecuting judge who took on the Mafia, were murdered over the decades Battaglia photographed this world.

The history and the personal life details flesh the film out a bit. But the picture is at its most engaging when it focuses strictly on the woman and her dogged work, showing her photographs in the Mafia stronghold of Corleone (go figure), using images to shake her neighbors out of their complicit silence.

It takes guts to take on the mob in a place where its been tolerated for centuries. And sometimes the bravest of those in that fight aren’t in uniform. Some of them are still carrying a Pentax.