Equal parts dark and comically disturbing, “The Brass Teapot” is a fantasy parable for our times, a film that literally equates pain with greed.
A car wreck is how it begins. Alice (Juno Temple) is forever job hunting, that degree in art history being a $40,000 dollar waste. And John (Michael Angarano) was just laid off. A fender-bender next to an antique store has Alice doing something she oughtn’t – swiping an ornate, baroque brass teapot.
“Stealing? We’re like two steps above white trash as it is!”
But there’s something about this kettle. The “pain” of the car crash has led to a wad of money popping out of it. Alice makes the connection in a flash. Pinch, punch or cut yourself, or sock John in the kisser, and money comes out.
Thus do the impoverished lives of these small-town folk change forever – just so long as they’re willing to suffer for the cash. “No anesthesia” dentistry, elaborate tattoos, fights picked in bars, you name it – they suffer it.
And get paid.
“It’s not going to get out of hand,” she says. So of course it does, starting with the Hassidic thugs who show up, rough them up and try to swipe back the teapot. Yeah, it’s got history. Dr. Ling (Steve Park) knows it and tries to warn them. This “Antiques Road Show” curiosity is going to get them killed.
“Brass Teapot” rides a very thin premise – pain for financial gain – a long way, rather like that 2009 film that was first a “Twilight Zone” episode, “The Box.” First John is the pragmatist, with Alice addicted to the cash. And then things change.
For the first time, they’re keeping up with all those rich 20somethings (Alexis Bledel is their old nemesis, and new rich neighbor once they buy a McMansion). Their trashy landlord (Billy Magnussen) used to hit on Alice when they were late on the rent. Now, he’s got his eye on their money source.
Director Ramaa Mosley, making her feature film debut, makes the self-violence squirm inducing and the dilemma intriguing enough to hold our interest.
But as the ideas run out and the film takes its predictable turn towards doom, “The Brass Teapot” stumbles into tedium, a parable that never quite resolves itself into the moral lesson it so desperately wants to convey. Perhaps a few more visits by the Hassidic thugs would have helped. 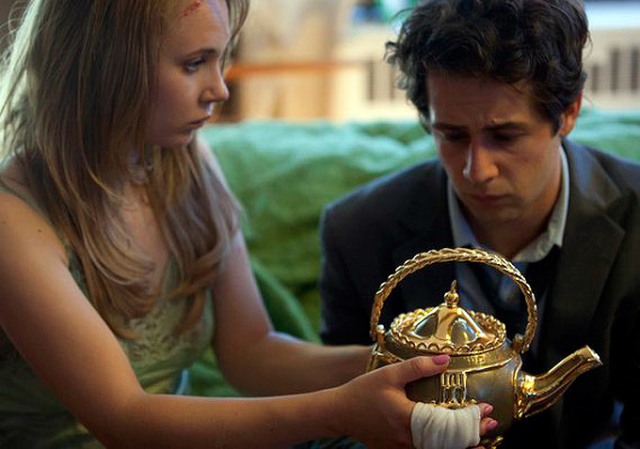